March 27, 2015
Lawyers for Robel Phillipos asked a judge Friday to postpone his April 6, 2015 scheduled sentencing hearing until after the cases of two of his friends, Dias Kadyrbayev and Azamat Tashayakov, are resolved. 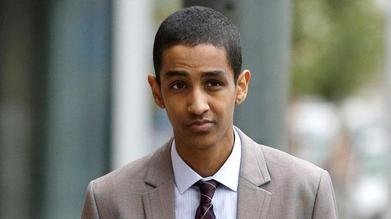 Kadyrbayev, 21, and Tazhayakov, 21, were convicted of obstruction in 2014, but a recent Supreme Court ruling cast doubt over prosecutors' decision to charge the pair under the Sarbanes-Oxley Act, laws usually reserved for curbing wrongful acts by large commercial corporations.

Both could be acquitted or face new trials, court papers say.

Phillipos, a 21-year-old friend of accused Boston Marathon bomber Dzhokhar Tsarnaev, was found guilty in October 2014 on two counts of lying to the FBI.

According to prosecutors, Phillipos lied to investigators about having visited Tsarnaev's University of Massachusetts-Dartmouth dorm room days after the bombing, where he was said to have witnessed Kadyrbayev and Tazhayakov remove potential evidence, including fireworks and a laptop computer.

But Phillipos' lawyers stated that the then-19-year-old was high on marijuana when he spoke with investigators, and was under extreme pressure to sign an incorrect statement by his FBI interrogators at the time.

Former Massachusetts governor and one-time Democratic presidential nominee Michael Dukakis, who came to Phillipos' defense, told the court that following a conversation with investigators, Phillipos had tearfully revealed that he couldn't even remember what he said.

Jurors rejected that argument as well as the attempt by Phillipos' lawyers to show him as a frightened young teenager.

In January 2015, U.S Attorney Carmen Ortiz said Phillipos, who rejected a plea deal, was "not deserving of mercy just because now that he realizes he’s facing eight years in prison."

"He was so high he couldn't remember",  said Demissie, “That statement was signed by a scared, intimidated and threatened 19-year-old.”
Recommend this:
Tweet
VISIT OUR MAIN ARTICLES AND FEATURED STORIES INDEX HERE
Want more? For NIPS, quick takes, and blog posts by the main contributors to this site visit here
________________________________________________
We actively encourage comments, discussion and debate on this site! Please remember to keep it relevant and be respectful at all times.
comments powered by Disqus
Powered by