ACLU, Todashev, and surveillance concerns by B Blake.

April 18 2014
ACLU sues the FBI and Carmen Ortiz
The American Civil Liberties Union (Massachusetts) recently filed a complaint in the United States District Court of Massachusetts requesting US Attorney Carmen Ortiz and the FBI turn over documents related to the secretive operational structure and function of the Joint Terrorism Task Force (JTTF).

They also demanded other records relating to the shooting of Ibragim Todashev by the FBI in his Florida home in May 2013.

The complaint states the ACLU first attempted to obtain the documents through Freedom of Information Act requests (FOIA), which were ignored with respect to the JTTF records, and denied with regard to the Todashev documentation. At the time of the request in December 2013, the government claimed the release of Todashev's records would potentially compromise the on-going investigation into his death.

According to the ACLU, as the results of the Todashev investigation have since been made public, it believes the government no longer has grounds to refuse access to records in the case.

One aspect of Todashev's case that may be of particular interest to an organization such as the ACLU concerns the level and methods of surveillance placed on him, in the month prior to his death.
Pressure and surveillance
Ibragim Todashev first encountered the FBi on April 20, 2013 when he was questioned about his friendship with Tamerlan Tsarnaev and possible links to the Boston marathon bombings.  This initial questioning occurred as a result of an alert generated by the ORION database on Todashev.

Over the next four weeks he was subjected to continual phone calls from Federal agents, and was interrogated several times, often for many hours at the FBI's local Florida office. This pattern was repeated with Todashev's girlfriend, Tatiana Gruzdeva, his estranged wife Reni Manukya, and several of his friends and aquaintances.

The Bureau also placed him under intensive round-the-clock surveillance: a situation of which Todashev himself was well aware.

His girlfriend Tatiana Gruzdeva stated:
'When we left the house, he would point out cars to me. When we go to the workplace or we go hang out with him, he show me in the street, ‘Look, look, they’re following us.’'
Khusen Taramov, a friend of Todashev's, also commented on the Bureau's surveillance:
'When Ibragim was nearby ... three to five cars and we knew it. Every time we go somewhere, they follow us.'
New information indicates that not content with simply monitoring Todashev using traditional methods, the FBI took their surveillance one step further.
Drones
According to recently released reports, Todashev was also subject to aerial surveillance, more commonly known as 'drone surveillance.' The admission was made by an Orlando Joint Terrorism Task Force Officer who had been monitoring Todashev for the previous four weeks, and was reportedly outside his apartment on the night he was killed.

He ﻿revealed that when Todashev became involved in an altercation in a carpark (he allegedly knocked another man unconcious), the incident was filmed from above with the use of an Unmanned Aerial Vehicle (UVA), or drone, whilst officers monitoring from the ground looked on and did nothing.

Regardless of the agents' reasons for inaction, this new detail is important as it leads to an inevitable question. Why was Todashev subject to one of the FBI's most secretive and highly criticized methods of surveillance?

The Bureau barely even acknowleged the existence of its drone program until very recently. It's considered particularly controversial, not least because of the widespread concerns it violates fourth amendment rights. The FBI believes it can conduct drone surveillance without the nuisance of obtaining warrants, and has done so on every mission it has ever flown.
FBI use of UAVs 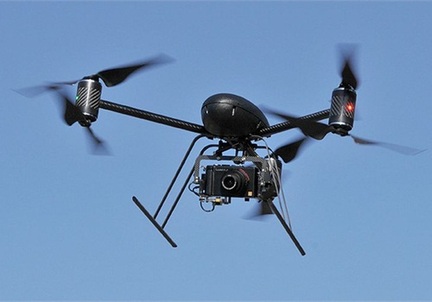 It was in June 2013 that then FBI director, Robert Mueller, finally admitted before the Senate House Committee the FBI does, in fact, use drones for surveillance over domestic US airspace.

He attempted to allay concerns about the program by insisting the Bureau's drone use is exclusive, stating that:

'our footprint is very small, we have very few and of limited use'

Mueller refused to provide details about the Bureau's operational protocols on the use of drones, how many/what types of unmanned aerial vehicles (UAVs) are actually in its possession, or the true cost of the program thus far.

However, on October 30 2013, the U.S. District Court in D.C. ordered the FBI to release its drone documents on a rolling basis to Citizens for Ethics and Responsibility in Washington (CREW), who had submitted a Freedom of Information Act request following Mueller's admission. The documents contained high levels of redactions, but appeared to confirm the ex-Director's previous statement on the limited use of drones.

One of those documents was a letter the Bureau had sent to Senator Rand Paul in July 2013, in response to concerns over drone use.

According to the letter:
'The FBI uses UAVs in very limited circumstances to conduct surveillance when there is a specific, operational need. UAVs have been used for surveillance to support missions relating to kidnappings, search and rescue operations, drug interdictions, and fugitive investigations.'
It continued:
'Since late 2006, the FBI has conducted surveillance using UAVs in eight criminal cases and two national secutity cases.'
The letter also confirmed that drones had also been authorized for deployment in three other cases, but had not actually been flown.

The date of the correspondence could prove to be significant. If the FBI claims it has only ever used drones for surveillance twice in cases of 'national security', one of those cases is likely to be Ibragim Todashev's. Again, what was so particular about Todashev and why did the Bureau feel it was necessary to monitor him in such a way?

New records emerged this week that, although heavily redacted, shed further light on some of the cases of drone surveillance listed above.
Muckrock gains some insight...
The documents were obtained by Muckrock as part of its drone census project. They revealed how drones had been deployed to a monitor a 'large scale dog fighting operation' and a child kidnapping/hostage crisis case in Alabama. They were also considered for use as part of an Organized Crime Drug Enforcement Task Force (OCDETF) investigation into Mexican cartels, although no confirmation exists as to whether they were deployed in that case or not.

On May 9 2012, a UAV deployment was actioned at short notice to assist with a kidnapping, murder and unlawful flight investigation. The mission was lauded as a 'signal achievement in the history of the FBI':

The case is thought to be that of Adam Mayes, who had been placed on the FBI's 'ten most wanted' list on the same day.

The FBI and state investigators found Mayes and two young girls on May 10 - the day after a drone was deployed to a kidnap/murder/unlawful-flight investigation - in the woods a few miles from Mayes’s home in Mississippi.

Media reports all noted that the search was only brought to fruition when a Highway Patrol officer 'spotted a small blonde child peeking over a ridge'. The use of a drone to assist with the manhunt was never reported, and the Bureau refused to confirm whether their 'signal achievement' ever came from the Mayes case.

If all that wasn't enough, Muckrock's records also revealed something else: something very disturbing. Despite the Federal Aviation Administration (FAA) having urged the FBI to inform it of drone deployments in US domestic airspace, the Bureau may forego that request in 'exigent circumstances.' In other words, certain drones which the FAA describe as 'the same as manned fixed-wing aircraft' - aeroplanes - can be secretly deployed without informing the relevant authorities of any safety details surrounding flight paths/altitudes etc.

Under such circumstances, what could possibly go wrong?
Todashev waits...
While the FBI admits to its use of UAVs in 'very limited circumstances,' precisely what some of those circumstances are still remains a mystery. When Motherboard asked the Bureau to clarify details surrounding the latest batch of records, Special Agent Ann Todd confusingly stated:
'Other than the hostage crisis site in Alabama, we have not publicly identified specific cases where we have used unmanned aerial vehicles (UAVs)'
The FBI appears to have forgotten some of the very information it has already made public.

None of the documents released in the last six months provide any details about drone deployments in the two cases of 'national security,' and if history is anything to go by, obtaining that information will not be easy.

The FBI has resisted all reasonable attempts to discover more about the Bureau's drone program, and continues to remain secretive and highly selective in the information it does release. The ACLU has a chance, but will the Bureau play ball?

Unfortunately, the likelihood of discovering why a drone was used to monitor Ibragim Todashev seems further away than ever.

Related posts:
Suspected Terrorists or Terrorizing Suspects? The Killing of Ibragim Todashev
If the FBI lied did Waltham pay the price?