BAGS: A shockin image or a shocking claim? by B Blake

A photographic essay offering an alternative explanation to the Twomey image

There will be very few people who are unfamiliar with one haunting photograph. A shocking image that has been seen by millions worldwide that depicts a tragic scene - an 8-year-old little boy with only moments left to live, a bomb contained in a backpack and Martin Richard's alleged killer stood just feet away. Below are some examples of how this photograph was presented to the world. 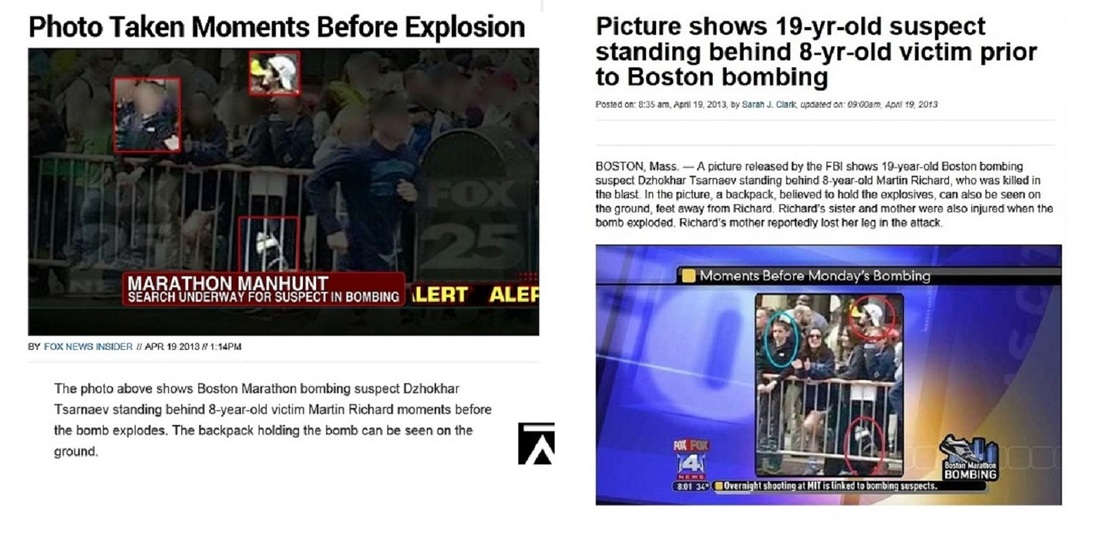 The New York Daily News published this front page in response to what the photograph reportedly showed, calling for the death penalty for Tsarnaev as justice for the many victims who unwittingly appeared in the image alongside him. 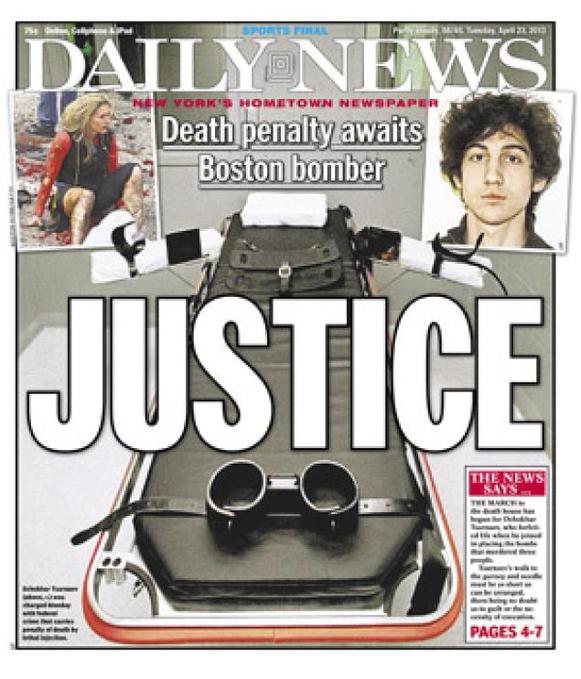 The image itself  has been subject to much debate. Some believe it may have been manipulated in some manner, whilst others believe there is just 'something not right' about it, but it has to be said that the majority of the public believe it to be an accurate representation of the tragic event that was about to unfold. Tsarnaev had deposited his backpack which was about to explode, causing the deaths of little Martin, Lu Lingzi and the horrific injuries sustained by many others.

I fall into the 'something not right' category and I'd like to begin by examining the backpack. Many have argued that the backpack could not have belonged to Tsarnaev as it is the wrong color. Whilst I agree, this explanation is not without its problems for one overriding yet very valid reason. If the backpack belonged to someone else why have they not come forward and stated as such? Through this next series of photographs I will offer an explanation that seeks to answer that very question.

(Note: none of the images have been edited or manipulated in anyway, although some have been enlarged and had their exposure levels adjusted to bring out fine detail)

Lu Lingzi was identified in several images taken from the opposite side of the street earlier in the day. She was capturing runners on film as they passed by. Lingzi had in her possession a camera bag/case that she was carrying on her left shoulder. Although not the exact bag it was very similar to the one pictured below and featured a velcro pull back top, and a zippered pocket allowing access to the various compartments inside. 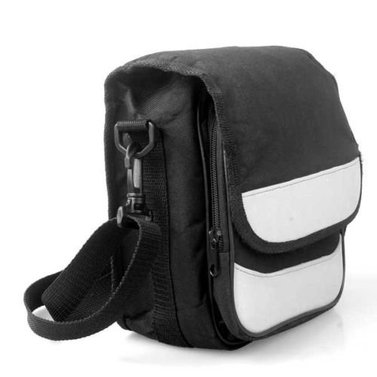 This photograph shows Lingzi in the crowd with her camera bag visible at her side. 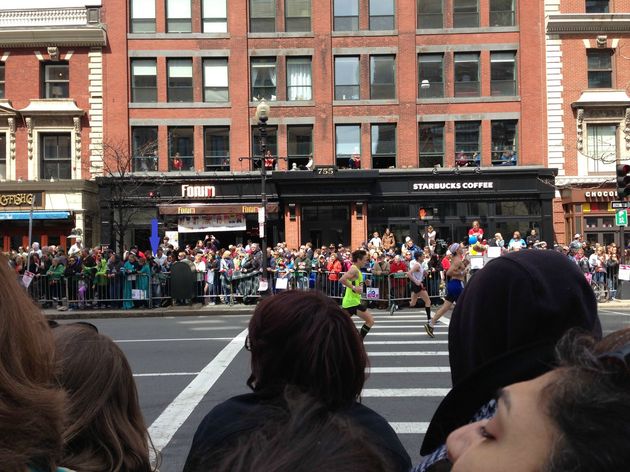 This next image has been cut from the one above and enhanced to pick out several features relating to her bag. She is holding her camera in her right hand, with her bag to the left. The velcro pull back top is open (revealing the grey fabric underneath). The bag itself is square-shaped, which we can tell by the way the light bounces off it and the gap underneath it that allows us to see through to the crowd behind. The zip pocket is open. Lingzi is likely to be in the act of assembling/adjusting her camera and her left arm can be seen leading down to the vicinity of the open bag. Please click on the image to familiarize yourself with these features. 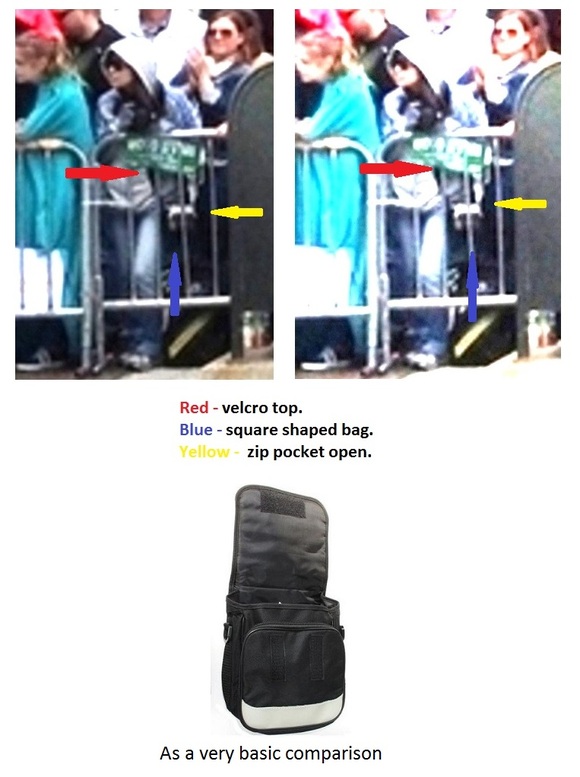 Another photograph from across the street reveals parts of Lingzi's bag in more detail, here. 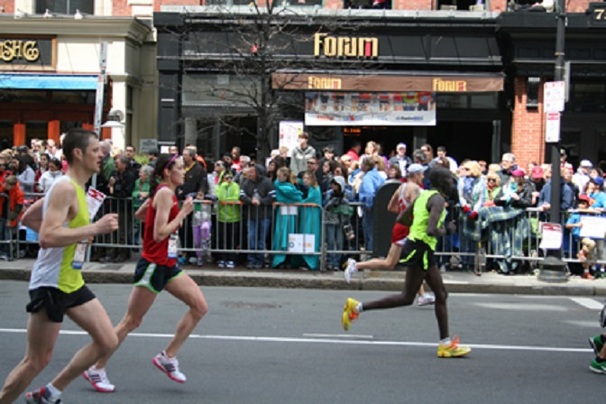 This image has been cut from the one above and enhanced also. Lingzi has now closed her bag - the pocket has been zipped up and the velcro fastening top has been sealed back down. The square shape of the bag can just be made out around the base, but the top looks slightly 'flat'. This is because Lingzi has removed the camera from it, leaving it relatively empty, which causes the bag to sag. Again, please click on the image to view the features. 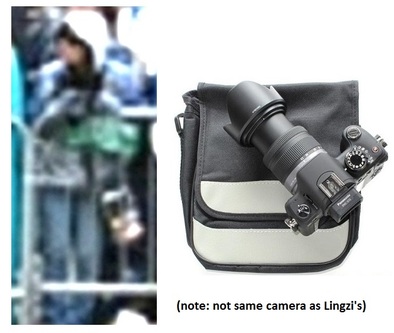 With the above in mind let's return to the Twomey image and what is specifically referred to as a large backpack containing a 30lb pressure cooker device. I have outlined the suggested backpack below. It appears to have a pocket on the front that looks open somewhat, and also looks to be of backpack size and shape. 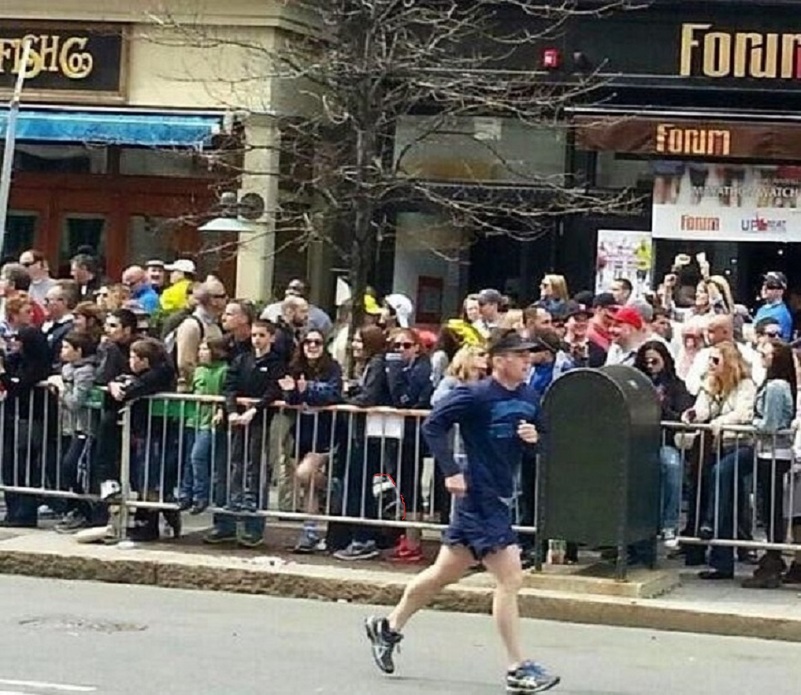 But is the backpack all it purports to be?
No, it isn't.

The 'backpack' may well be Lingzi's camera bag.

Below are three images cropped from the Twomey photograph above. One that is untouched, one with the exposure turned up and the other in the infrared spectrum. Both these methods of enhancing photographs reveal different types of detail, so are included together for due diligence. Earlier in the day a white sign had been secured with zip ties to the metal barrier. It fell off/was removed, leaving only the circular zip tie left. It was in the exact location of the 'pocket' of the 'backpack'. The photographs below demonstrate that it actually passes in front of the metal barrier, ergo it is merely a zip tie creating the illusion of a 'pocket' in the bag behind it. The images also reveal that far from being a large rucksack capable of carrying a 30lb pressure cooker, the bag is a lot smaller than it initially looked and is square-shaped. Again, an optical illusion created by the poor quality of the original photograph and the darkness in that general area caused by the black sports type holdall sitting in front of it that passes between the legs of the girl at the front. 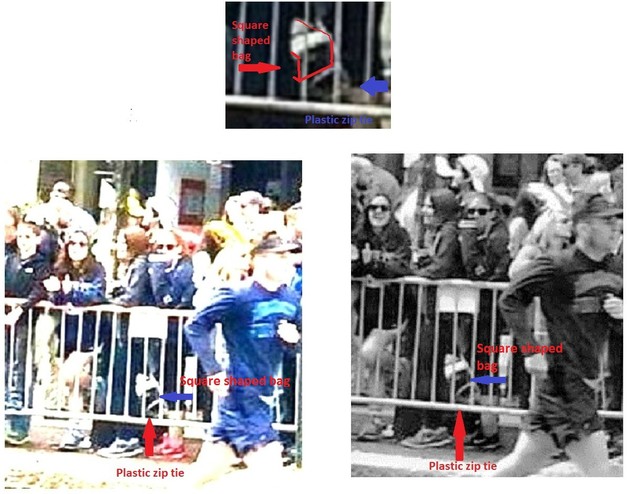 So we finish this photographic examination with this.

Lingzi's bag as it would appear if it was placed on the sidewalk and not hung around her shoulder. 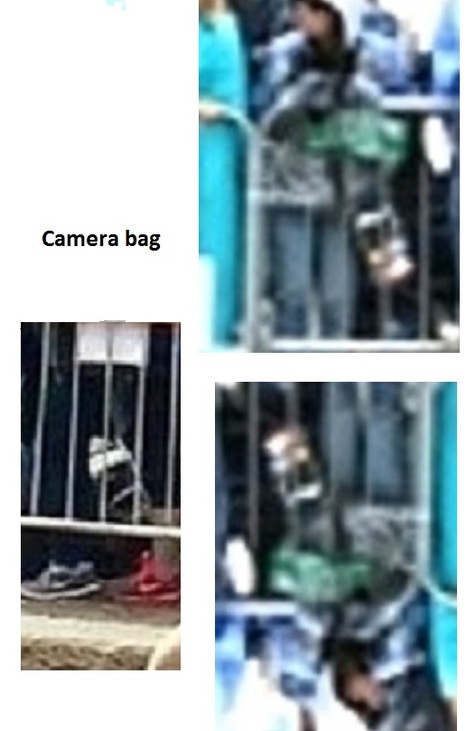 Lu Lingzi was brutally murdered when a device exploded outside the Forum restaurant. We know that Ms Lu was stood near the tree when the bomb exploded, due to the position her body lay in seconds after. At that time she had in her possession a camera bag. Her bag shared a remarkable similarity to the alleged 'bomb bag' that was initially identified in the Twomey image, of that there can be no question.

Interestingly, the FBI have never stated the bag on the ground contained a bomb. When initially asked by the media if it was indeed a backpack containing a bomb they replied, 'We are not able to say at this time'. It hardly mattered - the guilt of Tsarnaev was sealed with this photograph and the misleading information that accompanied it. This worked for the authorities at the time and led to very few questions being asked of the initial investigation. The world believed the narrative in the misguided belief there was photographic 'proof'.

The media did not bother to look at the Twomey photograph in a critical and objective manner. If they had done so, they may not have been so quick to declare that it showed a backpack on the ground that contained a bomb and called for Tsarnaev to face the death penalty on the strength of one photograph alone. Other explanations are forthcoming although unfortunately this may be far too late for Dzhokhar Tsarnaev, in the public mind at least. The photograph and its dubious claims were distributed throughout the world. The majority of the people who viewed it did so in the mistaken belief that it provided 100% proof of Tsarnaev's complicity in the bombing and along with publications such as the New York Daily News have joined the calls for him to be executed because of it.

It doesn't, and the media cry to execute an individual based on the hasty misinterpretation of one single photograph should surely be considered a crime in itself. Equally frustrating is the silence from investigating authorities who are no doubt all too aware that there is no explosive device visible in the photograph yet have said absolutely nothing. Considering the wealth of 'evidence' that the public has been treated to pre-trial, the excuse that it may impede the pending prosecution case simply doesn't wash.

There is now real cause for reasonable doubt over the integrity of the image and what it purportedly shows. It can now be simply interpreted as this:

A picture of an 8-year-old boy, a bag, and a man accused of a crime.

How can this mess ever be considered as providing justice to the victims of the Forum attack? They need a proper and transparent investigation to be able to come to terms with what happened that day and move forward with their lives. They don't need to be misled by inaccurate reporting either, a feature that has reared its ugly head in this case many times over the last few months. It is an insult to their recovery, an insult to those who died, and a slap in the face to one very sad victim in particular. A woman who was killed - her name was Lu Lingzi.

Why did no one step forward to claim the bag as their own? It's very possible they couldn't.