Bags Cont...Just how many 'distinctive' bags were at Dzhokhar Tsarnaev's feet? by B Blake

We were recently able to demonstrate that the now infamous 'backpack' which appeared in the Twomey photograph, was quite possibly nothing of the sort. Lu Lingzi had a camera bag in her possession that day which shared an uncanny resemblance to the 'backpack' -  labelled by many as a bomb. Whilst identifying Lingzi's camera bag, something else revealed itself in the photographs alongside her. Something that may pour even more doubt on the official narrative which makes specific reference to Dzhokhar Tsarnaev dropping a distinctive backpack outside the Forum restaurant on 04/15/2013.

The Boston marathon is an event attended by well over 250,000 people on an annual basis. One only has to take a look at footage of the crowds of marathon spectators to see that many of these people attend the event whilst carrying backpacks. At times, these bags are deposited on the ground for the length of the entire marathon course.

This situation also applied to the sidewalk outside the Forum restaurant. Many bags were deposited there throughout the day. Some only remained on the ground for a short period of time, whilst others remained there for considerably longer. One such bag could be seen next to Lingzi, and it was left on the floor next to the mailbox.

It was a black backpack (as per the wording of the Indictment against Tsarnaev - his bag was grey ), yet it still shared an obvious similarity to his own. The bag was lying on its front revealing only the rear and its straps, nestled behind another item placed in front of it. The first picture below is in its original format and shows the location of the bag. 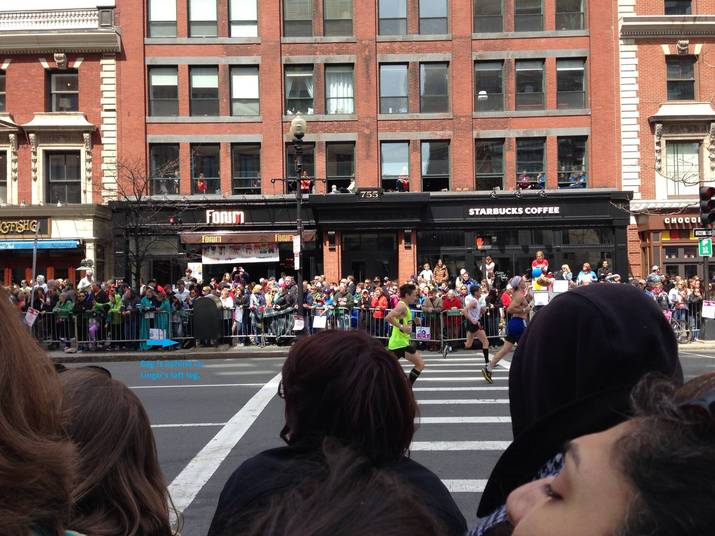 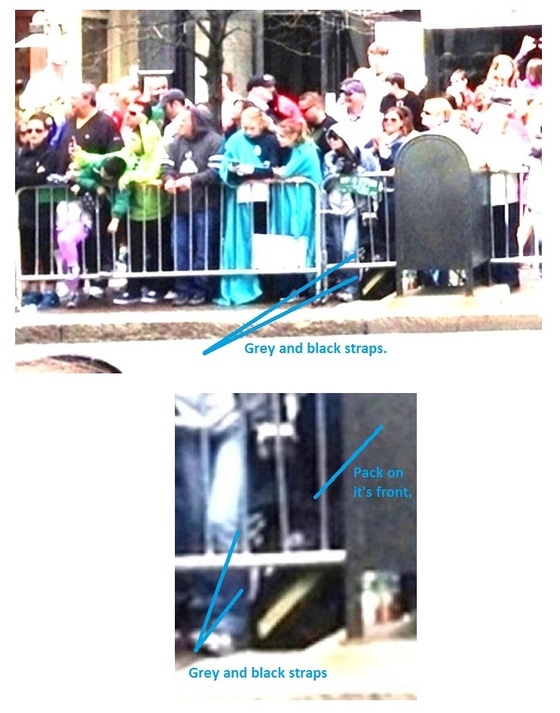 We are unable to determine what the front of the backpack looked like due to it lying on its face. Yet the backpack itself was seen on the ground for at least two hours before the arrival of Tsarnaev and the explosion itself. Could this backpack be the one referred to in the criminal complaint and the indictment against Tsarnaev? It was in the right place.....

"...approximately 15 seconds later he can be seen stopping directly in front of the Forum Restaurant and standing near the metal barrier among numerous spectators, with his back to the camera facing the runners. He can then be seen apparently slipping his knapsack to the ground, A photograph taken from the opposite side of the street shows the knapsack on the ground at bomber 2's feet."

We have previously proven that statements contained within the affidavit about what was claimed to be observable in the footage of Tsarnaev outside the Forum restaurant were far from accurate. The claims stated there were no other objects on the ground in the vicinity of the bomb and we were able to positively identify a minimum of three. An agent also asserted that he could determine nothing in the area of the explosion prior to Tsarnaev's arrival that may have contained a bomb - again, clearly false considering the objects/bags we identified after running the Twomey image through infrared software. It's possible another mistake was made here also, and the careful attention to wording contained in the affidavit indicates authorities are all too aware of that fact.

"He can then be seen apparently slipping his knapsack to the ground".

The word 'apparently' has no place in a sworn statement if there is clear and irrefutable surveillance footage of Tsarnaev depositing a backpack at the scene. He either did or he didn't - the language lets us know authorities are not so sure. Could Tsarnaev have merely let it slip from his shoulder? Don't ask investigators - they don't know. This is further evidenced by the fact that investigators sought to confirm the alleged planting of the device using a picture from across the street.

And herein lies a massive problem. There is nothing in the vicinity of the metal barrier that remotely resembles Tsarnaev's backpack in pictures taken from across the street - except the black backpack with distinctive straps that was seen near Lingzi's feet. Did investigators somehow get confused? We have since been informed that the bomb did not explode near the metal barriers, but further back into the crowd nearer to the Forum restaurant. Yet this claim creates another significant and thought-provoking issue.

"A photograph taken from the opposite side of the street shows the knapsack on the ground at bomber 2's feet."

The crowd was thick and dense in that area and Tsarnaev was several rows back. Under such conditions it would be impossible to conclusively identify a bag on the ground as being the exact backpack carried by Tsarnaev that day.

So what do we have here?

Unfortunately for Daniel Genck and the victims of the Forum attack, not very much at all. A surveillance tape that does not conclusively show Tsarnaev depositing his backpack at the scene. This is backed up by a photograph that either shows Tsarnaev in the wrong place with a bag near his feet - and not necessarily his own - or Tsarnaev in the right place, but the bag itself can never be positively identified. Pitiful under the circumstances.

We don't know if the black backpack that was seen near Lingzi's feet contained a bomb or not. In all likelihood it was probably a perfectly innocent item, just like the hundreds of other innocent items that littered the sidewalk outside the Forum that day. The point is this.

There were many bags in the vicinity of the explosion that day, any one of which could have contained the horrific device that killed and maimed so many. So far, our investigation has shown that two of these bags shared notable similarities to Dzhokhar Tsarnaev's backpack and were present for a significant period of time before Tsarnaev arrived. Lu Lingzi's camera bag (repeatedly mistaken by the media and referred to as the 'bomb bag') and an as yet unidentified black backpack. The claims that Tsarnaev's backpack was somehow 'distinctive' are just that - merely claims that carry no evidential value when faced with the reality of stringent court proceedings. The wording of the criminal complaint indicates that authorities are none too sure about what belonged to whom, or exactly where, or even when the device was allegedly planted. Tsarnaev's defense team will be fully aware of these discrepancies also and will have understandable reasons to raise these issues in open court. It will then become apparent to all that this case is certainly not what it was purported to be - truthful, thoroughly investigated, accurate, and airtight. The majority of the evidence against Tsarnaev appears highly circumstantial, another fact that will not escape the clutches of  any defense lawyer worth his salt.

One has to consider how the victims of this terrible crime will feel if the case collapses, which under the current set of circumstances could be a possibility. Reasonable doubt surrounding the evidence of Tsarnaev planting a device at the scene exists, it is real, and it is palpable and what's more, it is provable. They will be made to suffer twice, a grossly unfair situation of which many are sadly not even aware.  The insistence by authorities that they have 'got their man' and the willingness of the media to repeat this mantra is a travesty.

We actively encourage comments, discussion and debate on this site! Please remember to keep it relevant and be respectful at all times
comments powered by Disqus
Powered by