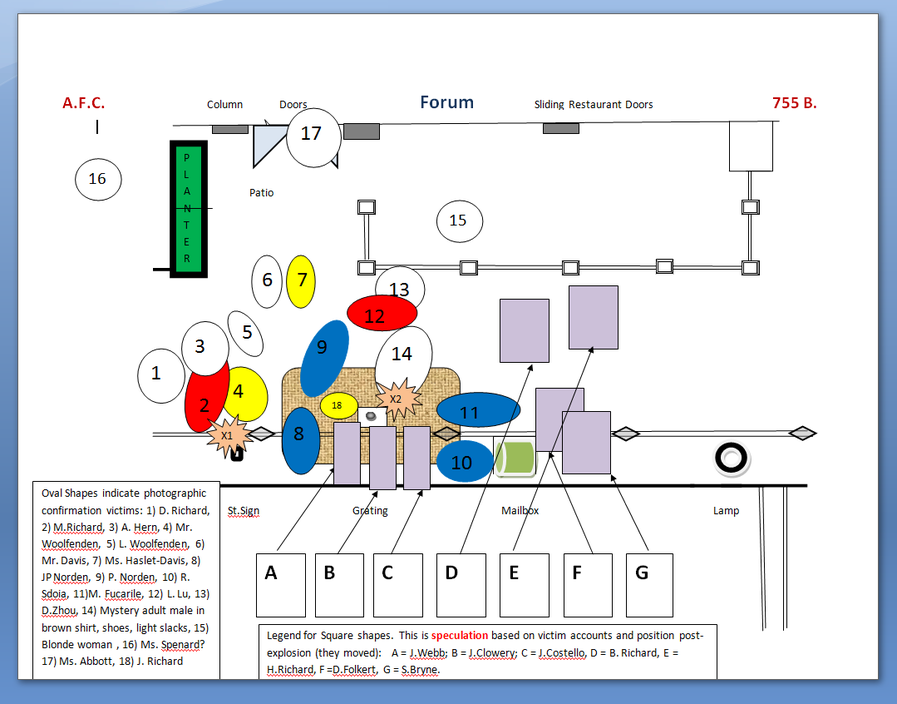 I will post a complete summary in the days to come.  For now, this diagram of the Forum restaurant patio, site of the second explosion, reflects possible locations of the pack, bag, and satchel found in the vicinity within up to two minutes before the event in front of the Forum. 09/03/2013 MB  (Note:  You may left click on this image to enlarge it.)

These Victims have injuries that show a sharp demarcation between left and right extremities. The line of demarcation runs from starburst X1 in above diagram between #4 and #8-#9 to the corner post of the iron patio fencing.

Starburst Labeled X2 is the location of the light-colored backpack (yellow arrow) supposedly placed on the ground at D. Tsarnaev's feet in this photo. 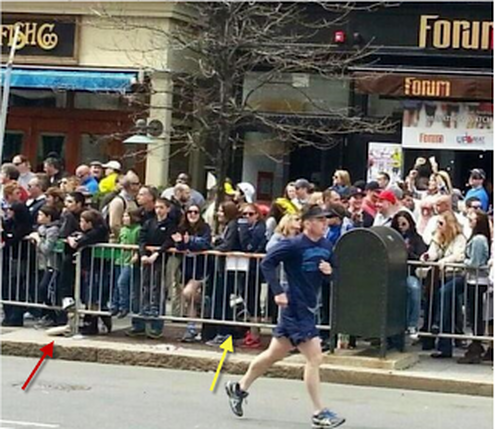 Here's the legend of the injuries, color-coded as well.

Red:  These two circles reflect the site's two fatalities. Victim #2 suffered such an horrific injury it was apparent to those who viewed him he could not be saved.  A field amputation would be likely, and would indicate he was very close to the explosive device.  Victim #12 also suffered a horrific injury, similarly not reported.  Victim may be seen in site photos to be lying on her stomach. Her injury was so severe she too was unable to be saved, again indicating proximity to the explosive device.

Yellow:  These three circles reflect the site's three known field amputations.  The young father #4, the young dancer #7, and the very young little girl #18 all had left-lower limb field amputations.  It is speculation the little girl may have been closer to her deceased brother and crawled away to the location by the tree where the photographer's lens captured the scene.

White:  This second group of white circles ( #13, #14, #15) reflect victims with right-side injuries not resulting in amputation.  #14 has not been identified but sustained a sufficiently severe injury he was unable to leave the scene on his own post-explosion.

These circles representing individual victims combine locations gleaned from personal accounts reported in the immediate aftermath of the event and photographs widely circulated on the web. The main point of reference photograph will be provided below. What follows next is extrapolation from injuries sustained and again subsequent photos of the site post-explosion.

Lavender:  The barrier fencing was knocked down and dragged across Boylston.  This occurred after the explosion based on the photographic evidence showing no one in the street as the flames erupt into the street.  A and B sustained severe burns and clothing mutilation to the backs of their lower limbs.  C sustained burns and shrapnel on his right arm and right leg and front of torso.   F sustained a less severe right leg injury, while G sustained undefined burns.  Finally, E sustained no reported injuries while D sustained less severe burns and injury to lower left front leg.  Actual position of E and F was not reported, but they may have been further to the right of the diagram and closer to the mailbox. It is speculation E was facing the restaurant for another means of leaving the sidewalk.

Second Conclusion:  If the white satchel (photo's red-arrow) was an IED, it was destroyed in the explosion. There is no longer a satchel on the sidewalk or street.

If the backpack (photo's yellow-arrow) was an IED, it too was destroyed in the explosion.  There is no longer a white backpack on the sidewalk or street.

The Federal Indictment of D. Tsarnaev states the bombs were carried in black backpacks. No mention of either the white satchel (starburst X1) or the white backpack (starburst X2) is made in the Indictment.  09/04/2013 MB