April 8, 2015
After two months of jury selection and 17 days of harrowing testimony from 95 prosecution witnesses, it took a jury just over 11 hours to find Dzhokhar Tsarnaev guilty on all charges related to the Boston marathon bombing explosions today. 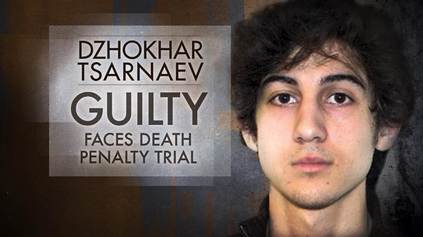 Tsarnaev, 21, was found guilty on each of the 30 counts against him, including 'using a weapon of mass destruction' and the murder of MIT Police Officer, Sean Collier.

17 of the charges carry a possible death sentence - and the same jury will now decide if Tsarnaev will die by lethal injection or face life in prison without parole as punishment.

Jurors began their deliberations Tuesday, after closing statements by the prosecution and defense. Assistant U.S attorney Aloke Chakravarty gave a ruthless, no-holds-barred closing argument, aimed squarely at invoking the horror visited on the marathon that day. Judy Clarke, lawyer for Tsarnaev, said he accepted responsibility for his actions, but made a strong case it was Tsarnaev's older brother, Tamerlan, who masterminded and led the attack.

U.S district judge George O'Toole ordered complete silence in the courtroom as the verdicts were read out.

As the clerk of the court slowly repeated "guilty" 30 times, Tsarnaev, dressed in black slacks and a blue shirt, stood impassively, at times scratching his head and goatee beard, before glancing at the verdict slip in front of him and casting his gaze over the jurors who now hold his fate in their hands.

Lucy Anderson, 30, who witnessed the verdict in person, said "It was a long time, it took half-an-hour. He looked like he couldn't wait to get out of there - as soon as the verdict was over his lawyer said a couple of words to him."
Facing the death penalty
In the sentencing phase, that same jury, comprised of 5 men and 7 women, will hear further witness testimony before being asked to decide whether Tsarnaev should be executed.

If they vote for the death penalty, a vote which must be unanimous, Dzhokhar will be transferred to Terra Haute, a Federal facility in Indiana, where he will be put to death by lethal injection.

The possibility of a death sentence is a thorny issue in Massachusetts, a state which outlawed executions over three decades ago. The process of finding a jury took as long as it did, partly because jurors needed to be 'death qualified' - meaning they could impose a sentence of death - many were so against capital punishment for Tsarnaev, they were ruled out of selection altogether.

Judy Clarke, Tsarnaev's attorney, has offered virtually no defense for her client throughout the trial, but painted a picture of him as a normal kid who talked about girls, spent time on Facebook, and tweeted rap lyrics - who fell under the thrall of domineering brother, Tamerlan.

Tamerlan, 26, died in a shootout with police 5 days after the marathon explosions and has been front and centre of defense arguments, despite prosecutors and the trial judge ruling out certain evidence that concerned him.
In her closing argument, Clarke said she was not seeking to excuse Tsarnaev's actions, and called them "senseless", but she made reference to Tamerlan's involvement, mentioning his name no less than 93 times, as she tried impress on the jury that Tsarnaev did not act alone.

Despite Tsarnaev clearly admitting his role, William Weinreb, for the prosecution, said in rebuttal "He's entitled to try to pin the blame on somebody else if that's what he want's to do, but you should see it for what it is, an attempt to side step responsibility."

Prosecutors have publicly voiced their support for the death penalty for Tsarnaev.

But Lucy sees things very differently, "An eye for an eye doesn't work, I'm opposed to the death penalty for any crime - and that includes this one," she said via telephone interview today.

The sentencing phase of the trial is due to begin early next week, according to court officials.