Exercises: How do the public know what is real? by B Blake

February 6th 2014
What is NICS?
NICS stands for 'Next-Generation Incident Command System' and is a disaster response system used by Federal agencies and the Department of Homeland Security to coordinate first responders/the army etc in times of dire emergency. This is how the developers of NICS described the system in a 2011 technical briefing:
'The nation’s emergency response capabilities have received significant attention because of the continued need to prevent, protect, respond, and recover from natural disasters, technological compromises to critical systems, and terrorist attacks.

Today's information sharing systems are stressed during large-scale events that involve thousands of responders from multiple jurisdictions and agencies working on response, relief and recovery efforts. Organizing, coordinating and commanding these efforts are significant technical and operational challenges, requiring timely collection, processing and distribution of accurate information from disparate systems and platforms'
The system is explained in more detail here.
NICS was operational at the Boston marathon 2013
The following slide was obtained by us from an unclassified presentation document relating to the use of the Next-Generation Incident Command System (NICS), and its use in various planned and 'live' exercises from 2010 to 2013. The NICS system was in place and was fully operational before the Boston marathon 2013 had begun: Were they expecting something? Or was this part of a planned event? 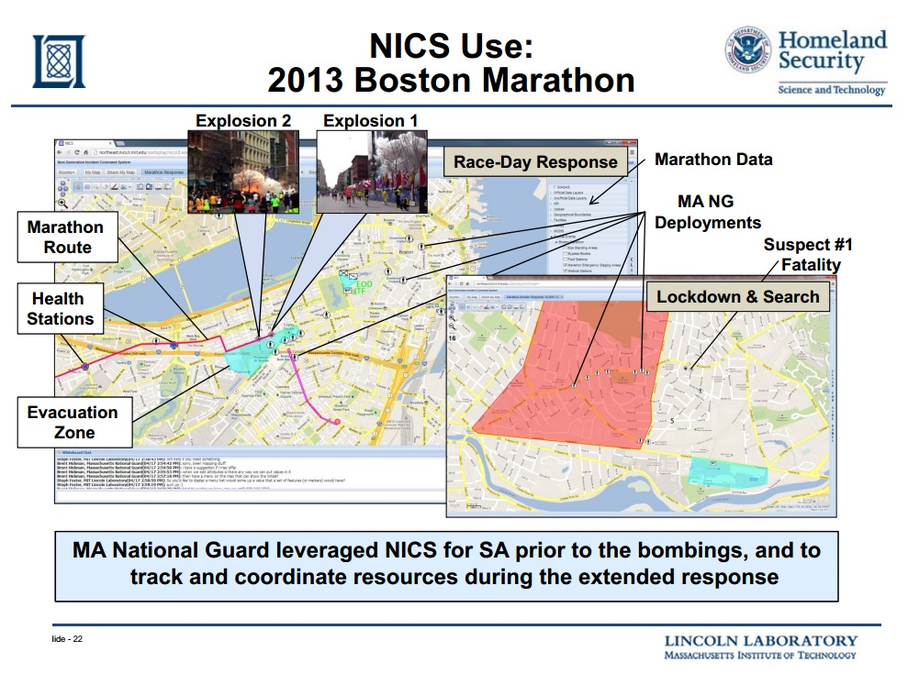 The full presentation document is available to view here.
NICS was first piloted as part of an exercise during the Boston marathon 2012
NICS was initialy trialled as part of a planned exercise at the 2012 Boston marathon, as explained by the Massachusetts Emergency Management Agency (MEMA) in this 2012 report.

This slide, (obtained from the same NICS presentation document referenced previously) relates to that first piloted exercise in 2012. It makes specific reference to a bank robbery and Natick Police Department. 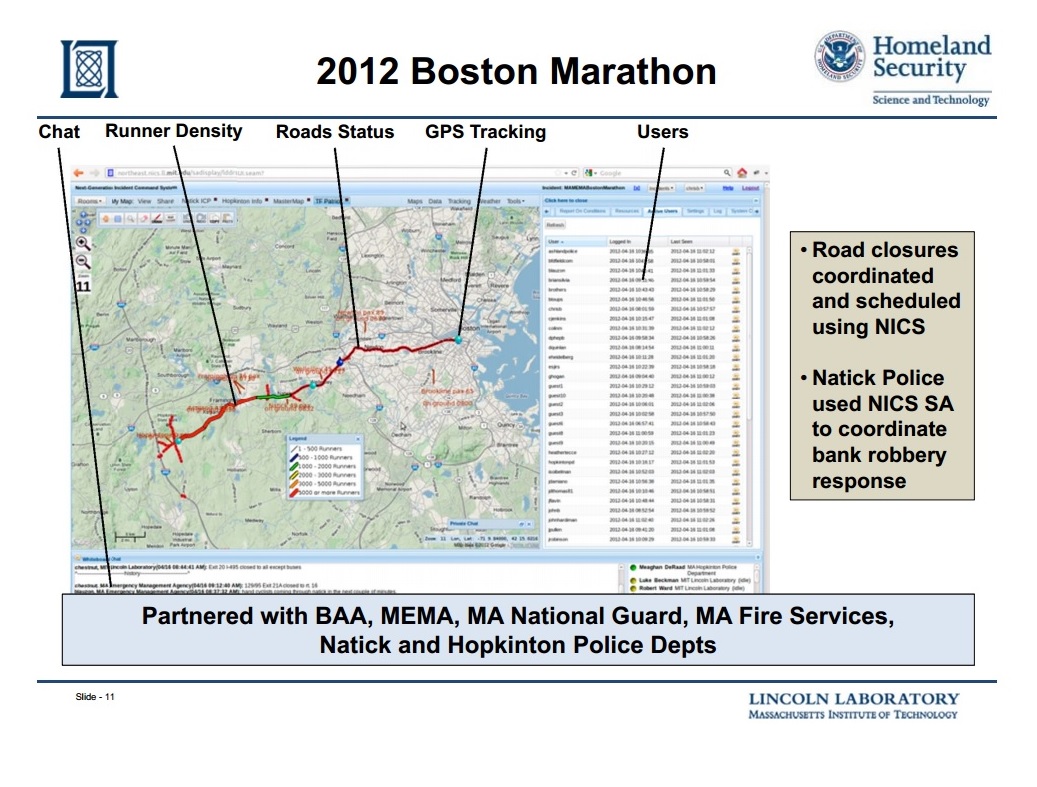 Bank robbery during the marathon
Local news reports appear to confirm that a bank robbery did indeed take place during the marathon right at the time of the NICS exercise, with one small exception: the exercise is not mentioned at all.
'On Monday, April 16, 2012 at approximately 2:23 p.m. the Wellesley Police Emergency Communications Center received a 911 call from an employee at TD Bank North located at 999 Worcester Street in Wellesley indicating that the bank had been robbed by an unknown party...
... Police officers were already out and about on the marathon route, and they began a search of the area. The Natick Police and a State Police K9 unit assisted with the ground search.

This incident is currently under investigation and no further information is available at this time'
This man was arrested for the robbery and the incident itself has faded into obscurity.
How do we know what's real?
Was the bank robbery real, or merely part of the planned exercise that was already taking place? Judging by NICS history of participating in planned exercises at different events, the robbery may well have been part of the exercise being run that day.

If that's the case, why do people think it was real? If it's not the case, how would we tell the difference?