January 20, 2015
Jury selection for the trial of suspected Boston marathon bomber Dzhokhar Tsarnaev resumed Tuesday, but was beset with difficulty when a stream of successive candidates appeared to disqualify themselves, including a woman who's husband believed Tsarnaev should have been shot dead before he was even arrested, an ardent capital punishment supporter who would opt for execution "regardless of the facts",  and a woman who surmised the majority of terrorist attacks were conducted by Muslims.

U.S District judge George O'Toole questioned 18 candidates as he sought to impanel an unbiased team of 12 jurors and 6 alternates to determine whether Tsarnaev, 21, is guilty of killing three people and injuring more than 260 in the 2013 marathon attacks, and if so, whether he deserves to die by lethal injection. 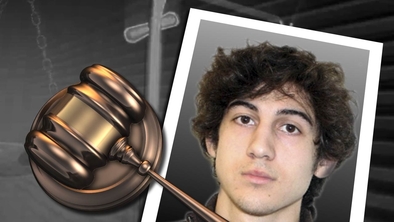 One woman, a social work manager from South Boston, said, although she believed Tsarnaev was guilty she could still be impartial - before revealing her husband had a "harsh opinion" of the case and thought Tsarnaev "should have been shot dead in the boat".

The woman later admitted "I don't think I can presume him [Tsarnaev] to be innocent because of the media coverage".

Tsarnaev was found sheltering in a dry docked boat in a Watertown back garden, severely wounded, on April 20, 2013 - 16 hours after fleeing a shoot-out which saw his brother, Tamerlan Tsarnaev, 26, shot dead by police.

Tsarnaev's lawyers have repeated argued negative pre-trial publicity and "emotionally charged" coverage have made it impossible to seat an unbiased jury in Boston, a view rejected by Judge O'Toole who has denied three requests to move the trial out of state.

Another candidate said she believed her feelings about Muslims would influence her ability to remain impartial.

"I feel like a lot of the terrorist attacks are by people who are Muslims, it seems like the radical part of the religion is not good", said the woman, adding, "I feel like even if I was shown evidence, I already feel like he's guilty and should get the death penalty."

A man, a former correctional officer now working for the post office, said he couldn't be impartial because he believed Muslims seemed "quite mixed up in their beliefs, in the way they act in America," before confirming he strongly supported the death penalty and "would have a tough time voting for life in prison, regardless of the facts".

A total of 52 prospective jurors have undergone questioning by Judge O' Toole so far.

But the vast majority appear to have barred themselves from service after revealing inherent bias towards Tsarnaev, personal connections to the bombings and aftermath, or views incompatible with the requirements for 'death qualified' jury.

To serve on the jury candidates must be willing to impose a death sentence on Tsarnaev, if they find him guilty.
Impartial or merely wanting to serve?
Several prospective jurors questioned Tuesday said they had no preconceived views on Tsarnaev’s guilt, and would listen to the evidence before reaching an opinion, or deciding on a punishment in the event of a guitly verdict, whether life in prison or execution.

A woman who worked as a teacher said she once lived in Watertown where residents, including her boyfriend and other friends, were ordered not to leave their homes while authorities searched for Tsarnaev after the shoot-out with police. Brian Glyn Williams, her former history professor, also taught Tsarnaev Chechen history while he was in high school, and may testify for the prosecution.

Despite her apparent unsuitability, the woman still said she could remain impartial.

"You’re supposed to assume someone is innocent until they’re proven guilty,” said the woman to O’Toole.

Defense attorney David Bruck suggested the candidate was merely providing the answers a court may find favorable because she wanted to serve, noting several of the people being questioned were "very eager" to be seated on the jury.

Another woman, who worked as a billing clerk at Massachusetts General Hospital said she held no opinion about Tsarnaev’s culpability and would be able to consider both possible sentences if Tsarnaev is convicted.

But Bruck accused the woman of providing deliberately 'vague' answers in a bid to get herself seated, after she claimed to be "unaware" of the recent Charlie Hebdo attacks in Paris, 'forgot' President Obama visited Mass General after the attacks, and explained the reason she posted a pro-Boston Strong facebook message in the immediate aftermath of the explosions was because "everybody did it".

S.I. Rosenbaum, senior editor at Boston Magazine, said "you can tell when people really want to be on the Tsarnaev jury because they claim to have no opinions about anything normal people have opinions about".

The observation was shared by Lana Jones, a reporter from WBZ radio.

"I've counted four people so far today who sound like they want to serve on the Tsarnaev jury", said Jones.

Tsarnaev, who appeared animated and actively engaged with the selection process, is also charged with shooting Sean Collier, an MIT police officer killed three days after the bombings. He has pleaded not guilty to a total of 30 charges, 17 of which carry a possible death sentence.

Judge O' Toole said he expects testimony to begin on January 26, but that date appears unworkable due to the slow progress of jury selection.
Recommend this:
Tweet
VISIT OUR MAIN ARTICLES AND FEATURED STORIES INDEX HERE
Want more? For NIPS, quick takes, and blog posts by the main contributors to this site visit here
________________________________________________
We actively encourage comments, discussion and debate on this site! Please remember to keep it relevant and be respectful at all times.
comments powered by Disqus
Powered by