Leaks: Weak arguments and staggering admissions by B Blake 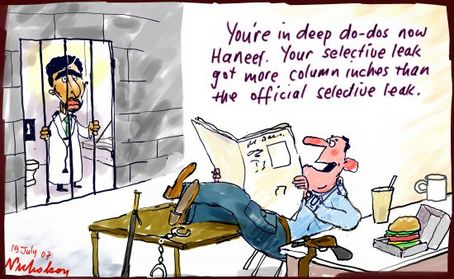 In a government motion filed on May 16, 2014, Federal prosecutors stated there is no need for a hearing on what defense attorneys have called leaks and improper comments in the case of Boston Marathon bombing suspect Dzhokhar Tsarnaev.

The government said contrary to defense assertions, there have been no leaks 'whatsoever' of grand jury material, and no current or retired Federal law enforcement officials have made prejudicial public comments.
Comments are not prejudicial to right to a fair trial
Prosecutors argued public remarks made by Richard Deslauriers (ex-SA in Charge) and Stephanie Douglas on 60 Minutes and National Geographic's docu-drama Inside the Hunt for the Boston Bombers posed no threat to Tsarnaev's right to a fair trial. But they did concede had Deslauries still been in office when he made the comments, he might have been in violation of Department of Justice rules.

While prosecutors regard Deslauriers and Douglas as private citizens, it's clear both possess vastly superior knowledge of the investigation than the average citizen. They are asked to comment for that reason alone. In doing so, they have the ability to influence public perception with insensitive remarks in a way no other private citizen could. The government's failure to even acknowledge such a simple concept is worrisome - it suggests a level of arrogance and contempt for the public's intelligence that is simply astounding.

The rationale and purpose behind Carmen Ortiz' own participation in the 60 Minutes documentary remains a mystery. The show makes reference to  "evidence that would solve the case," implying such evidence is undeniable. In other words, it offers up the total presumption of guilt prior to trial. As an attorney, Ortiz knows better.

The government failed to address the remaining issue of other Law Enforcement officials who also have spoken publicly about the case.

Explosives evidence not received by the defense
According to prosecutors, recent reports regarding the alleged sophisticated nature of the bombs did not constitute a leak.  They framed their argument on the fact this evidence had already been made public through an unclassified TEDAC report obtained by NBC News on Apr 26, 2013. Unfortunately, they failed to note this long forgotten media report was contrary to all post and prior assertions regarding the crude and unsophisticated nature of the bombs.

When the news broke again on April 15, 2014 (in a  story  far more detailed than the one that preceded it almost an entire year earlier), the alleged sophisticated nature of the bombs seemed to be a fact of which Tsarnaev's attorneys were completely unaware.

They complained they had received no evidence related to the sophisticated nature of the devices whatsoever, and were still awaiting discovery on the matter. Despite this, the government attempted to brush off defense claims and said:
"Tsarnaev's main complaint in this paragraph appears to be that he has not recieved the TEDAC report in discovery. The reason for that has to do with TEDAC's mission...although TEDAC is physically located at the FBI laboratory at Quantico, it is not primarily a Law Enforcement component of that agency"
Confusingly, prosecutors then appeared to acknowledge defense concerns stating "all FBI laboratory reports are being produced to the defense as they are finalized."

In any case, they also noted:
"The TEDAC report referenced in the article was prepared in the days after the attack and made available to hundreds of law enforcement and intelligence agencies for the protection of individuals all over the world"
Under the circumstances, would it really be that difficult for the government to produce the report to the defense (whether obligated to do so or not,) without commenting on its findings on ABC News first?
Boat note revelations
Prosecutors then went to address the leak of the alleged 'boat note picture' which was first published by ABC News on April 17, 2014. They contended the release of the photograph did not constitute a leak as the text of the note was already 'quoted extensively' in the June 2013 indictment against Tsarnaev. Yet they omitted the fact the original leak actually occurred in May 2013, weeks before the indictment was ever made public.

In defense of the leak they also made a staggering admission: 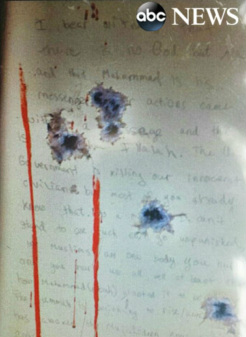 "The report does not “source” the photo, and the government is still researching its origin and authenticity.

Assuming the photo is genuine, it is possible a law enforcement officer could have disclosed it, but that is not certain; for several days after the Watertown shoot-out, the boat was in a semi-public space where it might have been photographed by individuals not associated with this investigation.

Since that time, the defense team itself has inspected the boat and was permitted to photograph it"
Aside from the fact the government seems to be struggling to verify the authenticity of the photo over a month after it was first published, the statement appears to point to a massive flaw in investigative procedure.

Prosecutors note the boat itself was left in Henneberry's garden  (a semi-public space) where individuals not associated with the investigation may have had access to it: ergo, the crime scene was left unsecured for several days.

This striking revelation points to a level of incompetence that almost beggars belief. Is the government seriously suggesting  members of the public could simply wander into the crime scene, climb inside the boat and begin taking 'trophy' pictures for their own amusement?

The government has now left itself open to all sorts of possible legal challenges regarding the admissibility of the note as evidence. Put simply, if members of the public were able to photograph it, were they also able to tamper with it?
Controlling the media: Michelle McPhee
Prosecutors also said they were 'unable to control the media' when there is clear public interest in a case. While such a statement has a basis in fact, the government did not acknowledge that in certain circumstances 'controlling the media' is precisely what they do.

Michelle McPhee is a well respected freelance journalist and has written a number of stories on the Boston Marathon bombing case. So is it mere coincidence that McPhee is also the same Boston journalist who has obtained several recent high-profile exclusives related to the investigation, each time citing 'Federal agents' as her sources?

The boat note picture, recent explosives story, and the revelation that Federal investigators were concerned about the 'activities' of Heda Umarov, the sister of a close friend to Dzhokhar Tsarnaev, were all stories broken by McPhee in a period of just four weeks in the lead up to the Marathon Bombings anniversary.

It's clear Michelle McPhee has a Federal source close to the investigation who is fully prepared to leak information whenever it suits. Moreover, the government's SAMs restrictions effectively bar Tsarnaev's attorneys from making public statements in his defense: against such odds, claims the government is unable to control certain aspects of reporting are patently absurd.
Right to a fair trial
Evidential leaks and insensitive public comments made by investigators - serving or retired - endanger the right to a fair trial, no matter what attempts the government may make to excuse them.

No one is suggesting the government should protect Tsarnaev from the media, but the government should  insist on upholding a suspect's right to a fair trial - for which the presumption of innocence is vital. This inalienable right, enshrined in law, exists for the protection of all citizens, including those accused of the most heinous crimes.

Whether prosecutors like it or not, that right and the presumption of innocence also extends to Dzhokhar Tsarnaev.
Related Posts:
Propaganda: How to spin yourself through a terrorism case
Trial by media: How to prejudice the outcome of pending prosecution
The other news: Discovery issues still at the heart of the BMB case
Defense lawyers, Senators and the media: All are refused access to vital information in the Boston Bombing case due to the 'ongoing investigation'. Why?
Recommend this:
Tweet
VISIT OUR MAIN ARTICLES AND FEATURED STORIES INDEX HERE
Want more? For NIPS, quick takes, and blog posts by the main contributors to this site visit here
________________________________________________
We actively encourage comments, discussion and debate on this site! Please remember to keep it relevant and be respectful at all times.
comments powered by Disqus
Powered by