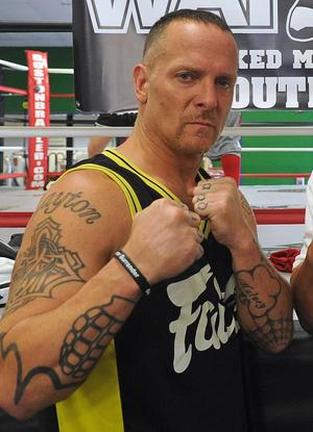 MMA fighter and co-owner of Wai Kru South Shore, Steven “The Sandman” Dunn, was arrested and charged on January 18th 2013 for his alleged links to an oxycodone distribution ring, which circled in and around Boston and as far away as Florida and New York.

In the conspiracy, Dunn, 47, of Brockton played the role of middleman, traveling to Florida no less than 70 times between 2008 and 2012 for one to two days, when police allege he received prescriptions for oxycodone.

According to a 72-page affidavit detailing an eight-month wiretap investigation, he also purchased wholesale quantities of oxycodone from co-defendants Adam Roberts, 29, Jodie Kilday, 46, and others and then distributed the pills to “street level” customers through another dealer Robert Henriques, 55, of Brockton.

The affidavit, filed by a Massachusetts state trooper assigned to the U.S. Drug Enforcement Agency, alleges that Dunn profited from distributing oxycodone. In an intercepted phone call between Dunn and Kilday in December 2012 in which the two are haggling over a change in price, Dunn is heard saying: “I gotta make a dollar somehow.”

John Howard, who trained with Dunn in Boston and now helps train others at the Wai Kru South Shore stated: “His personality doesn’t suggest that type of lifestyle.”

Steve Dunn has been held in federal custody while awaiting trial.

Dunn asked to be released on a curfew with electronic monitoring, and other conditions, including a prohibition on the use of alcohol and drug treatment. In addition, his girlfriend’s mother, who owns the residence where Dunn lives, was willing to post the residence as security, according to the U.S. attorney’s office detention order.

The court refused to release him.
'In light of the nature of the offense, the defendant’s lengthy criminal history, and the presumption of risk of flight and dangerousness applicable to this case, the court finds that no condition or combination of conditions will reasonably assure the appearance of the defendant as required and the safety of the community'
The order states that Dunn is alleged to be a 'major player in the conspiracy, buying wholesale quantities of oxycodone and then distributing them to retail customers for "street level" sales'. It also states that his criminal record shows many defaults and violations of probation and he was on bail when he was arrested in this case. Dunn has a lengthy criminal record revealing many previous charges and convictions for violent offenses, such as assault and battery with a dangerous weapon.

This article was originally published with the title "Co-owner of Wai Kru arrested on Federal drugs charges: Links to Florida". We have been asked to point out that Wai Kru (Alston) is not the same gym as Wai Kru (South Shore) and the two are, in fact, entirely different businesses.

We accept the original title may have been misleading.

Consequently, we have changed the title of the article to "Co-owner of Wai Kru South Shore arrested on Federal drugs charges: Links to Florida".

We always strive for accuracy at BMB and apologise unreservedly for any confusion caused.
Recommend this:
Tweet
comments powered by Disqus
Powered by