Police corruption: Drug gangs, steroids and fighting gyms. Who really had a motive to kill the Waltham three? By B Blake
November 18th 2013 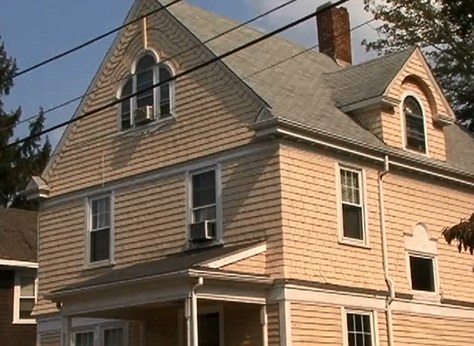 On the evening of September 11, 2011 Brendan Mess 25, Erik Weissman 31, and Raphael Teken 37, were violently murdered in Mess' second floor Waltham apartment (pictured left). The three friends were heavily involved in the Boston gym scene, Mess as a boxer and martial arts instructor, Weissman a body builder and Teken a martial arts instructor and personal trainer.

All three were found in separate rooms and had their heads pulled back and throats slit from ear to ear with such great force that they were almost totally decapitated. Large amounts of marijuana were deliberately sprinkled over their mutilated bodies, and $5,000 was left at the scene.

At the time, police stated that it appeared the killer and victims knew one another, and that the murders were not random. They tied the crime to illegal drugs and insisted that the answers to the brutal slaying were firmly rooted in that world: all three men had been arrested previously on drugs charges and were also known to deal drugs in their local community. The motive for the killings was clearly not robbery and the ritualistic nature of the murders strongly suggested they had been committed in order to send a message to others: this is what will happen to you if you cross our paths.

Yet, for two years the crime remained completely unsolved. After repeated criticism from the victims' families that the case had never been properly investigated, and the admission from authorities that they had not given it the attention it so clearly warranted, a surprising new breakthrough was announced on 22nd April 2013.

Tamerlan Tsarnaev, the deceased accused marathon bomber, had been responsible for the killings. Tsarnaev had known Mess for many years and the two highschool friends shared an interest in boxing, regularly training in the gym with one another. The motive for killing his friend and two others in such a barbaric manner? Drugs?

No, the motive had changed. They were Jewish.

Tsarnaev had murdered his best friend and two others not in vengeance for any perceived insult, not to rob them, nor out of some sudden and inexplicable murderous impulse. He almost decapitated the three simply because they were Jewish.

Several weeks later the public were informed that he had an accomplice. Ibragim Todeshev (himself a registered mixed martial arts fighter) was shot dead in his Florida home on May 22nd 2013. The killing of Ibragim Todashev by an FBI agent was perhaps the most bizarre twist in the Boston marathon bombing case to date. Todashev was unarmed, had no legal counsel present, and was recovering from major knee surgery at the time of his death. He was reportedly about to write a confession to the murders, in which he would also implicate Tsarnaev, moments before he was killed. The case was solved.

Aside from the alleged confession of a dead man, which was never taken down in writing, obtained under circumstances the FBI refuse to clarify, and only ever witnessed by the one sole federal agent who shot his unarmed interviewee 7 times prior to actually obtaining a statement from him, not very much at all.

Authorities state the evidence consists of:

Tsarnaev was a close friend of Mess and trained regularly with him in the gym. He had visited the property on numerous occasions, sometimes up to several times a week. Under the circumstances, it would be very surprising if there was no DNA linking him to the property. Furthermore, he was known to have several friends and contacts 'in the area' other than Mess, Weissman and Teken. So the notion that his use of a mobile phone somewhere 'in the area' (which actually encompasses a 20 mile radius) at the time of the killings, somehow implies guilt is nothing more than conjecture - or guesswork of little, if any evidential value in court of law. The issue of Mess' missing gun being tied to the murder of Sean Collier is an equally contentious one. Why attempt to insinuate it was the same weapon when there is never any prospect of proving such an allegation? An implication is not evidence: it is a speculation that can never be verified.

And is 'evidence' of Tsarnaev's apparent lack of emotion after the death of his friends really indicative of his alleged murderous acts? Tsarnaev was alleged to have 'laughed off' the murders at the time and repeated words to the effect:
'It’s crazy right? I guess if you [sell drugs], that’s what’s going to happen'
Yet what many fail to realise is that Tsarnaev himself also sold drugs. This may not have been a statement of indignation (if it was ever uttered at all), but merely a statement of fact. Could there have been another reason for Tsarnaev's absence from the funeral of his friend, other than the notion that he murdered him?

Yes. If the homicides were a result of vengeance and/or an exemplary punishment amongst drug gangs (as authorities initially stated), it is highly likely Tsarnaev knew exactly who was responsible for them. As such, the 'message' from the barbaric killings clearly got through.

Another point that seems to have somehow eluded investigators is of an entirely practical nature: The Waltham 3 were known drug dealers and lived in a world that reflected that. Tsarnaev and Todeshev (and anybody with a modicum of common sense) would realize just how dangerous and menacing a world that can be. They would have known that the three victims were likely to have been armed. They also would have known that Mess, Weissman and Teken were all physically very strong, incredibly fit, and had MMA training. Why would they go in there outnumbered?

Furthermore Mess, Weissman and Teken were found in three separate rooms with their throats slashed, yet there were no indications that they fought back against their attackers. Did these strong fighting men simply sit there and wait to be killed when they realized what was happening?
'Mess once challenged a person who tried to rob him at gunpoint in Cambridge, said a friend who witnessed the incident'
Mess approached his assail­ant and said, “Pull the trigger. Do what you have to do”
“Brendan was nobody to mess with,” the friend said. “He wouldn’t lay down and get his throat cut"
How could just two men take control of a situation like that?

The 'mounting evidence' in this case is nothing of the sort, and claims by authorities to the contrary are quite dumbfounding, especially in view of other individuals who had the means and crucially, the motive, to inflict such brutality on the three. Add to the mix an investigating force riddled with corruption, and it becomes increasingly difficult to accept that authorities have accused the right men: Tamerlan Tsarnaev and Ibragim Todeshev.

So who else could have committed the murders, why did they act, and how did they reach that stage?

One obvious reason stems from their connections to the criminal world. Were any of the men police informants either individually, or collectively as a group? All three men certainly fit the profile of a sought-after informant and the evidence strongly suggests they could have been approached with such a proposition on numerous occasions. Court records indicate that all three were known to police and had been previously charged with various offences ranging from drug possession to violence. Weissman, in particular, was facing serious charges after a search was conducted at his home in January 2011 during which police seized more than $21,000 in cash, along with drug paraphernalia and a wide assortment of drugs, including marijuana, hashish, cocaine, and Oxycontin. He had also expressed an interest in advancing himself further in the drugs trade - another very real bone of contention for any rival drug dealers.

The men were clearly operating in a dangerous world and what is more, the very people who had vowed to 'protect and serve' were right there with them. Only in Boston, they were doing quite the opposite.