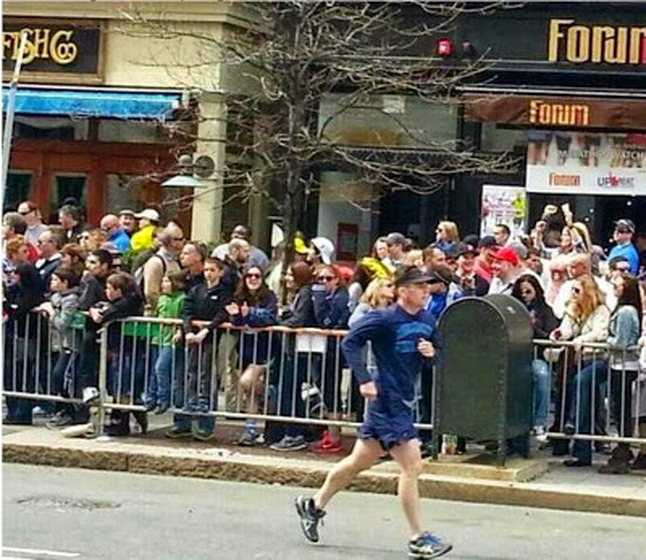 The famous Blue Runner photo (above) was held up by law enforcement as the definitive evidence proving Dzhokhar Tsarnaev was the Boston Marathon bomber at blast site 2.   It was used to inspire our anger and hatred against the brothers, the Muslim terrorists. I read one blogger who said "Look at that smug smile - as he walks away leaving his deadly bomb to kill that sweet little 8-year-old boy," (Martin Richard).  In the beginning, we were all horrified as well as the rest of the world as this picture and what it suggested was splashed all over the media and internet.

Around this picture and several others seen below, law enforcement put forward a narrative of how the bombing occurred and this formed the crucial elements of the original criminal complaint filed against Dzhokhar Tsarnaev. Mainstream media picked up this narrative and repeated it countless times so that it has become deeply embedded in the collective consciousness. On most mainstream news websites the narrative is repeated verbatim per the criminal complaint.

On this photograph in plain view, however, is a real challenge to the law enforcement, and media narrative. I am calling it  "The Blue Runner  Challenge."
In the above photo, the Blue Runner is exactly 1/10 of a mile away from the finish line.  This distance is confirmed by Google Maps (755 Boylston -665 Boylston).  The video below is that of an elite Boston Marathon runner wearing a head cam.  Notice when he or she passes the mail box in front of the Forum restaurant.  From that point to the finish line it takes about one minute.  We can safely assume it took Blue Runner more than one minute to finish the race, since he was running in the last of the 'non-elite' group of runners.

According to the criminal complaint filed against Dzhokhar Tsarnaev on April 21, 2013 by Special Agent Daniel Genck - Tsarnaev arrives in front of the Forum restaurant at 2:45:15.  He is supposed to have slipped his backpack off, lowered it to the ground and stood in this place for 4 minutes, while watching the race and fiddling with his phone.  This is verified by the pictures above and here.

At 30 seconds before the 1st bomb went off, he is seen lifting his phone to his ear and speaking and continues like this for 18 seconds.  At this point Special Agent Genck declares:

"A few seconds after he finishes the call, the large crowd of people around him can be seen reacting to the first explosion.  Virtually every head turns to the east (towards the finish line) and stares in that direction in apparent bewilderment and alarm. Bomber Two, virtually alone among the individuals in front of the restaurant, appears calm.  He glances to the east and then calmly but rapidly begins moving to the west, away from the direction of the finish line. He walks away without his knapsack, having left it on the ground where he had been standing.  Approximately 10 seconds later, an explosion occurs in the location where Bomber Two had placed his knapsack."

http://s3.documentcloud.org/documents/690347/criminal-complaint-united-states-vs-dzhokhar.pdf
It was necessary to quote the indictment at length because this is the critical moment in the narrative.  This is were Special Agent Genck defines for the victims, their families and the public exactly how the bombing at site 2 went down - all except for one thing.

Special Agent Genck neglects to mention one small fact staring at us all in plain sight - The Blue Runner Challenge.

From this place in the picture above, Blue Runner had exactly 1/10th of a mile to go before he reached the finish line.  As we have seen above, a runner in one of the elite divisions with the head cam on finished the exact same 1/10th in roughly 1 minute.   We also see Dzhokhar Tsarnaev has already dropped the backpack and is now in the middle of the sidewalk walking away.  According to Special Agent Genck, that backpack is set to explode in "approximately 10 seconds."  So, a legitimate question to ask is - did the Blue Runner get injured or affected by the blast in any way since he was so close?  Or, was he able to run back and help the injured at the Forum restaurant?

Apparently, he did not. 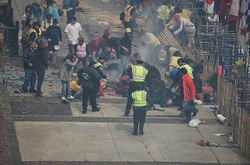 There are certainly more videos easily found on YouTube of the moments after the blast at site 1, where he is visible.  In this photograph, he can be seen in the blast area in the upper right hand corner.  There are several in this sequence that show him assisting and moving through.

By now it should be obvious.  The Blue Runner Challenge is this:  How does the Blue Runner, pictured above, run the last 1/10th of mile in less than 10 seconds?  It cannot be done.  The timeline law enforcement has boxed themselves into becomes all the more problematic when you consider the Leonard and Seale photographs/videos as well (more on this in a later article).
So, if we are to take law enforcement at their word that their photographic and video evidence shared thus far with the public is the basis for their criminal complaint, then it is flat out wrong.  Not only is it wrong, it strongly suggests gross incompetence bordering on negligence.   If it is not to be taken as the basis for the criminal complaint (as the later indictment strongly suggests) then the use of this photo to even suggest this is a basis for any degree of guilt, is a gross miscarriage of justice, and an unprecedented abuse of the public trust. Heads must roll.