The FBI Photographs: Not such an airtight case after all by B Blake

Special Agent Danilel R Genck in a sworn affidavit stated the following (page 5).
"I have observed video and photographic footage of the location where the second explosion occurred from a number of different viewpoints and angles including from directly across the street. I can discern nothing in that location in the period before the explosion that may have caused the explosion other than bomber Two's knapsack".


The Photographs From Directly Across The Street

This is a photograph taken from directly across the street that appears to show a knapsack on the ground with Dzhokhar Tsarnaev's head visible in profile. No other knapsacks, bags or containers appear to be in the vicinity. 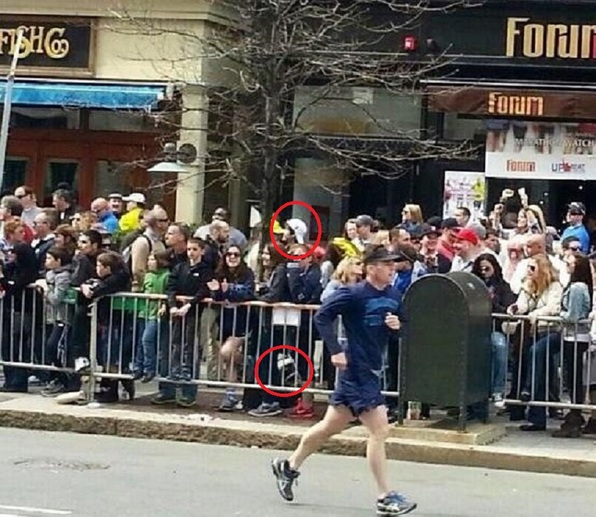 The picture above was taken with a mobile telephone and is of poor quality. Many areas are shrouded in darkness and it is difficult to make out fine detail. We ran the photograph through infrared software to determine if it contained within it anything that is invisible to the human eye (due to the quality).

Nothing was altered or adjusted in the image at all other than its size. 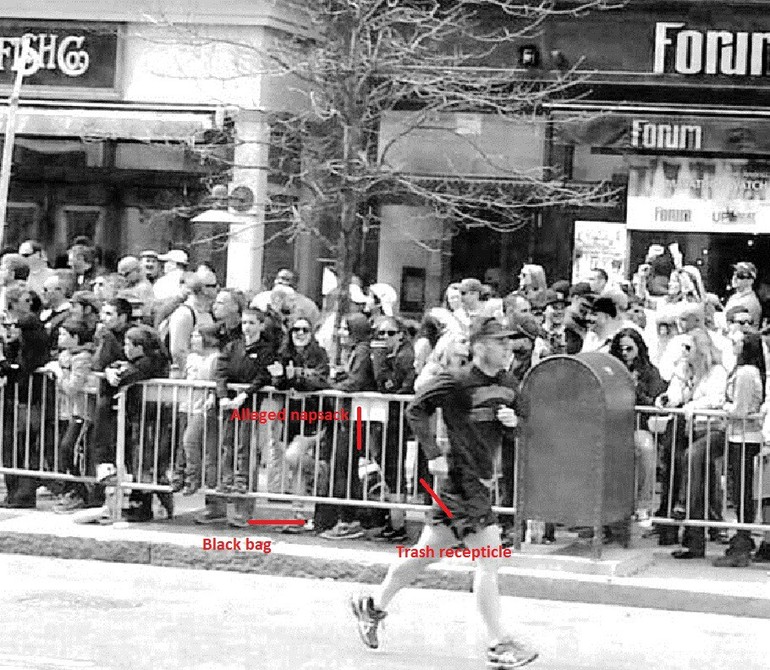 In the vicinity of where the bomb was allegedly placed three separate and distinct objects are visible.
The apparent knapsack on the ground, a black bag which a woman/girl at the front appears to be straddling and a small black trash recepticle further back towards the crowd.

All three of the items can be viewed from a number of different viewpoints and angles also, as alluded to in the Criminal Complaint and Indictment

This would indicate that the sworn affidavit contains a rather large and worrisome contradiction. There are three items in the vicinity of the alleged location of the device, not one, and all three were present before Dzhokhar Tsarnaev arrived on scene. This begs the question: how could investigators have reached the conclusion they so readily did?

The wording in the Criminal Complaint and  Indictment is very specific and gives the impression of certainty - yet strangely, it also gives itself room for alternative interpretation. Special Agent Daniel R Genck states:
"I can discern nothing in that location in the period before the explosion that may have caused the explosion other than bomber two's knapsack"
Whilst it may be perfectly true that agent Genck could have discerned 'nothing else' at the times stated, what that actually means is 'there may have been something, yet I couldn't see it'. Put simply, his statement may be read as follows:
'I couldn't see everything that was there because at times it was too crowded, and so I have no more idea than anybody else as to what may have been obscured, if anything at all. The only thing I can see is a bag at that particular time, one of many hundreds at the marathon, and one of maybe dozens in the vicinity of the Forum Restaurant ...'
Instead of 'the bag' being the only possibility after everything else has been excluded, the bag is one possibility among many which had not even been considered.......because it was impossible for anyone to see all that was there.

The impression of certainty was intended, but is clearly far from tangible - the certainty being based solely on the fact that he could indeed see nothing else that may have caused the explosion, but from the perspective of not being able to see anything much at all.
He had not been able to exclude anything else because he had no idea what might have truly been present

If he had, he would have noted there were indeed three items within the vicinity of where the bomb was placed and crucially, none of them were Dzhokhar Tsarnaev's backpack

It would be a different matter entirely if authorities had been able to take note of everything that was present, eliminated it, and then proceeded to draw their conclusions, but the very specific wording of the Criminal Complaint and proceeding Indictment indicates that they were unable to do so.

Moreover, it would appear that once again, they have either misrepresented or misinterpreted their own prosecution evidence. This has become part of an emerging pattern in relation to the early stages of the marathon bombing investigation, yet authorities do not appear to have taken any firm action since to correct their previous mistakes. Three people were killed and more than two hundred hurt by the twin explosions near the Boston Marathon finish line and these individuals deserve a thorough and robust investigation of the crime that will stand up to scrutiny in a court of law.

Authorities have given themselves an exit with the carefully crafted text contained within the Criminal Complaint and Indictment against Dzhokhar Tsarnaev, yet if this level of duplicity and legal manoeuvring continues, Tsarnaev's defence team will simply be able to close the door.

The author holds a Bsc (hons) Criminal Justice and Social Policy, MA Criminal Justice, and has worked extensively within the Criminal Justice System. She now takes a keen interest in investigative journalism with particular emphasis placed on social injustice, the rule of law, and the role of the media in forming public consensus in modern society.