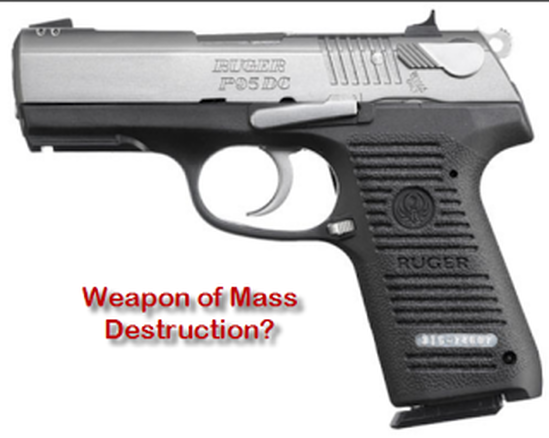 You are looking at an image of a Ruger P95 semi-automatic 9mm handgun. A deadly weapon in the right hands, a Ruger isn’t exactly a WMD as we’ve come to understand the meaning of the phrase.  In fact, the standard magazine for the gun holds just fifteen cartridges, meaning after getting off fifteen shots, stopping to reload is a necessity.

Fifteen.  It’s an important number to remember, because this Ruger, or one very like it, was the sole gun between the two Tsarnaev brothers on April 18, the night of the infamous Watertown shootout.(2)  Elder brother Tamerlan Tsarnaev had control of it when spotted that night by Officer John Reynolds, just 30 minutes after carjack victim “Danny” reported his Mercedes SUV had been stolen. What followed was the tale of a ferocious gun battle between two desperate suspects and a courageous group of dedicated professionals, the details carefully laid out in a taped interview with the Watertown police force by MSNBC’s O’Donnell.  There are just a few unanswered questions.

It was after midnight when Officer Reynolds of the Watertown force passed an SUV matching a stolen vehicle alert, making eye contact with the driver. When the driver turned off Dexter, the main road and onto Laurel Street, Reynolds did as well, believing he was following a car-jacker down a dark, sleepy suburban street after midnight. “He was going pretty slow…”
And then the crazy, inexplicable thing happens.

Apparently, without warning, the (then) unknown driver stops, exits the stolen SUV and walking boldly towards the police cruiser, begins firing on John Reynolds’s cruiser, “non-stop, couldn’t even count’em, just non-stop, heard them dinging off my cruiser." Reynolds understandably decides it’s time to put some distance between the shooter and himself, so:
”I backed up maybe 30 yards.”  He then jumps out of his police vehicle and using its door as a shield, the two men begin exchanging gunfire. (3) 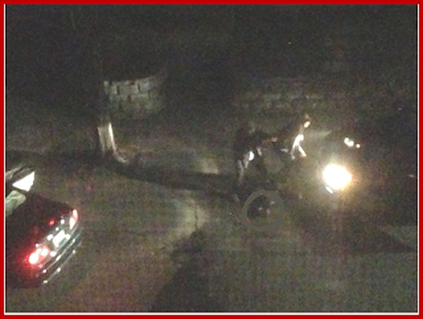 With the benefit of hindsight, we know the men piloting the two automobiles, the green Honda Sedan (MA plate: 2AH 760) and the black Mercedes SUV (MA plate: 137 N71) were the Tsarnaev brothers, and the shooter was Tamerlan, the older one.  They were eventually (incorrectly) identified later as the robbers of the 7-11 gas station in Cambridge and Dzhokhar has been charged with the murder of an MIT officer.

Did the brothers have a death wish that night?  Why would anyone walk right up to a cop car and start firing?  What’s to prevent the cop from poking his AR-15 out the window and laying down a welcoming round?

This lightning quick reaction of Tamerlan to Reynolds also puzzles Interviewer O’Donnell, who drills down a little with the Watertown police team who survived the events.

“Let’s just go over the strangest thing in this story which was this moment you lived through alone, Joe (Reynolds, Watertown Police Officer). You are in pursuit, and he stops, they stop, and get out of the car.  I have never heard of this in police pursuit of anyone. This stopping, getting out of the car, and walking toward a police officer in a car, and shooting.”

Why does Mr. O'Donnell ask this question?  Don't car thieves usually react violently, certain they can back down the police with a display of aggressive force? Put a little fear into the boys in blue and they'll usually walk away from the confrontation?

I share the reporter's skeptical reaction and can't help wondering:  what did provoke the fleeing Tsarnaev brothers into attacking Reynolds when they could have kept driving and very possibly made a clean getaway?

“He (Officer Reynolds) hadn’t activated his lights, or anything.  He didn’t let them know technically he was interested in stopping them or anything else.  They just stopped dead in the middle of the road and started attacking him.  You know, so it wasn’t a pursuit.  I think those words are misleading.”  (4)

Since a sensible answer to why Tamerlan went on the attack isn’t forthcoming, O’Donnell wisely does not press further, instead heaping praise on the team of heroes.

We the viewers are left hanging here.  We only know one fact: once Tamerlan began firing, he unleashed the full wrath of local law enforcement on the brothers.

Within ten seconds after Reynolds begins returning fire with his own handgun, he has backup. Reynolds had radio’d in he was under attack, and the nearest officer, Sgt. MacLellan, roars in from around the corner on Dexter to come to his aid, immediately observing the heated gunfire exchange. Only the second officer on the scene, he parks his cruiser at the corner of Laurel Street, struggling for his AR-15 just as a bullet comes flying through his own windshield.

Believing the deadly Ruger being wielded by the carjacker-from-hell to now be focused on him, the Sergeant quickly settles for his own handgun and joins Reynolds in the street battle against the brothers.

If you take a look at the next photo, police vehicle headlights can be seen at the end of the block. So, was that bullet MacLellan allegedly dodged the result of a deadly accurate shot from a trained marksman, a shot gone astray, or something else?
It was a clear shot, but….

With an easy view to the end of the street, isn't it safe to assume Tsarnaev was aiming for Sgt MacLellan?  Amateur photographer Kitzenberg, sitting in his third floor bedroom, emphasizes in a taped interview with CNN’s Jake Tapper that “I could see all the way down (the) street and see the police vehicles at the end of the block there.” (5) (The blue X is the point where Reynolds had stopped behind the SUV, then slammed his cruiser into reverse to escape.) 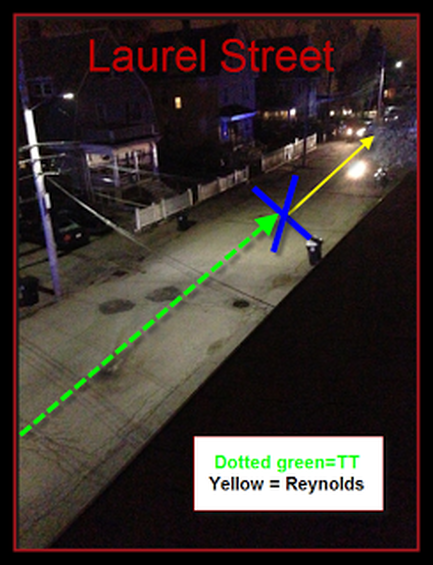 But the end of the block, at that corner Sgt. MacLellan flies around in his cruiser, is roughly90 yards from the two Tsarnaevs' crouched positions. Distances can be deceptive. Google Maps estimates it would take an average person a full minute to walk 90 yards.  (For comparison, an American football field, from end zone-to-end zone, is 100 yards.) 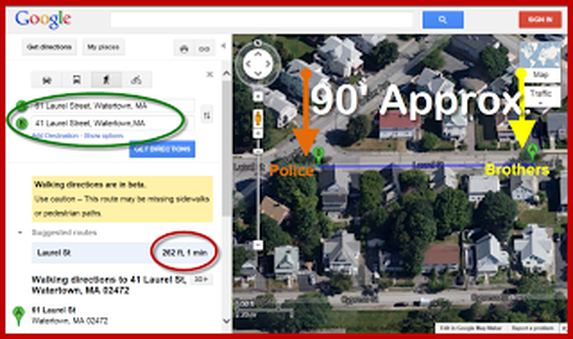 If you deduct the thirty yards Officer Reynolds claims he backed-up to get away, you can see that Tamerlan Tsarnaev would have triggered the gun battle by walking between 50 and 60 yards from his sheltering Mercedes SUV, firing steadily on Reynold’s vehicle.  What a foolhardy thing to do--was the elder brother playing suicide by cop?

Tamerlan's aggressive reaction seems in stark contrast to his earlier actions of the evening, the relatively low-key commandeering of the SUV Mercedes from “Danny”, circling aimlessly through the greater Boston neighborhoods for ninety minutes, then letting the hostage escape or even releasing him, if earlier news reports are to be believed.  And there's the image of younger brother Dzhokhar caught on surveillance camera during Danny's escape (6), heading out the front door of the 7-11 loaded down with Red Bull and junk food.  Doesn't the teen look like a very laid back kind of guy? 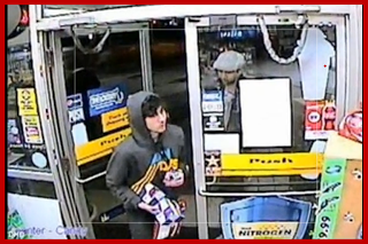 But that kid in the hoodie is an hour or less from a desperate gun fight with police that will leave his brother dead and Dzhokhar the most wanted man in America.

Likely no more than fifteen rounds were the catalyst for the shootout waged that night on the dark Watertown street.

“...non-stop, couldn’t even count’em, non-stop, (bullets) dinging off my cruiser…”


1)   Laurence O’Donnell, May 14, 2013 MSNBC News (http://tv.msnbc.com/2013/05/14/watertown-police-officers-how-the-tsarnaev-firefight-went-down/ Interview with Cops that Had Shootout with Boston Bombing Suspects (excerpt follows)  (at 11:24)
2)  June 27th, US Indictment of Dzhokhar Tsarnaev (Para No. 30)
3)  Source, Andrew Kitzenberg Courtesy of Getonhand.com
4)  See O'Donnell interview, tape at 11:40
5)  Source, Andrew Kitzenberg Courtesy of Getonhand.com
6)  Source: Shell Surveillance Tape.  In the middle of a hostage-taking, the brothers stopped for gas, careful to pay for it, and Dzhokhar picked up some snacks.http://www.independent.co.uk/news/world/americas/man-taken-hostage-after-marathon-blasts-speaks-of-his-terror-8589767.html
Want more? For quick takes or further information on some of the issues raised here, please visit our sister site : www.AllthingsForum2.blogspot.com


M. Baker:  The author didn't pay attention during law school, but passed anyway.  She's on her third career now, and finds this blog isn't just a hobby, but reflective of a passion for justice that colors everything she touches.  Still can't write worth a d*** though.