Todashev's family speak out: Accuse the FBI of intimidation and harassment after his death By B Blake

December 14 2014
The mother in law of a Florida man shot dead in his own home during a May 2013 FBI interrogation says her family were systematically harassed and intimidated by the Bureau in the wake of his death, but she refuses to "live in fear", despite several hair-raising encounters with officials related to the case.

Elena Teyer, 45, says at one point she was indirectly threatened with a gun and warned not become aggressive or make any suspicious movements, as "You know what can happen. We will shoot you". 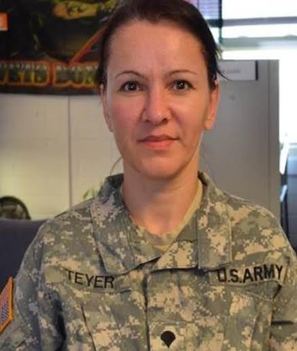 The alarming incident took place on May 22 2013, at Fort Stewart Army Base, Georgia, where Teyer, a former soldier, was assigned to the 'Warrior Transition Unit' as a pharmacy technician.

She described being forced to stand against the wall of a tiny, claustrophobic room, distressed and pleading to be left alone, as two FBI agents probed her for information about Ibragim Todashev, 27, a friend of suspected Boston Marathon bomber, Tamerlan Tsarnaev.

The interrogation took a sinister turn when one of the agents pulled up a chair and placed his foot on the seat, within 'touching distance' of her person. He then raised a pant leg - openly revealing a weapon strapped to his ankle as he issued the menacing threat, according to Teyer.

She believes it was a direct reference to the death of her son in law, Todashev, who had been gunned down just hours earlier, after purportedly implicating himself and Tsarnaev in the brutal Waltham murders of 2011 when, the FBI say, he flipped a table injuring Special Agent Aaron McFarlane, who promptly shot him dead.

But Elena insists she did nothing to warrant the chilling warning:

"The same agents' attended my home the night before and I'd already been over all I knew", explained Teyer, " I was vulnerable, grieving and upset, but never, ever, aggressive. They got angry and told me I'd be in serious trouble if I didn't 'talk' or cooperate - and then that happened".
"Planning to shoot FBI agents"
A few weeks later, on June 26, 2013, Teyer was met with a another shock - the FBI had arrived at Fort Stewart again, this time requiring her for "urgent questioning" - having allegedly received information that she, herself, was 'planning to shoot FBI agents', and was therefore considered a 'threat'.

Teyer says she was left outraged and dumbfounded by the accusation, but declined to speak to the agents' without an attorney present.

"They began shouting aggressively and warned me a refusal to talk would not 'look good'", said Elena, "As shocked as I was, I still knew my rights - they let me go when they realized I wasn't going to converse alone".

A subsequent meeting between Teyer and her superiors took place - who swiftly dismissed the FBI allegation as 'baseless' and pledged her their full support. She was cleared her to continue working, but a month later, on July 24 2013, Teyer was summoned to another meeting with her Platoon Sergeant.

The FBI had placed her under 'official investigation' and her security clearance was revoked as a result.

She was stripped of all in work benefits and placed on indefinite leave - but neither her Platoon Sergeant, nor Elena, were ever informed what she was placed under investigation 'for' and to this day, neither party has been made aware - she was never arrested or formally interviewed in connection with any crimes.

"It felt like I was being punished for something, but what?" asked Elena, "I'd done absolutely nothing wrong".
Harassed with nothing to hide
Teyer says her family faced ongoing FBI harassment in the days and weeks following Todashev's death, and stresses her refusal to be interviewed did not mean she had anything to hide - she was simply acting on the advice of her CAIR Florida attorney's, who had advised her never to speak to the FBI alone.

"The pressure was constant, they called us continually, visited our workplaces, visited our friends, visited friends of friends, but we'd already told them all we could", said Teyer, "Lawyers told us, from then on, no matter what the situation, if they [the FBI] wanted talk, we should request an attorney first - that was not negotiable".

Elena left the army with an unblemished record on March 28 2014, having served for six and half years. She received numerous awards and good conduct medals during her service, and was also decorated for efforts in "The Global War on Terror".

Investigators claim Todashev provided 'details' about his and Tsarnaev's involvement in the grisly slayings of Brendan Mess, 25, Erik Weissman, 31, and Raphael Teken, 37, who were found dead at Mess' Waltham apartment on September 11 2011, but the government recently admitted it has no evidence either suspect participated in the murders, other than an unfinished confession penned by Todashev, moments before he was shot.

The confession did not match the crime scene and fell short of even mentioning the killings.

Todashev's shooter, SA Aaron McFarlane, was cleared of any wrongdoing over his death, but it later emerged the former Oakland cop had been the subject of two brutality lawsuits and four internal investigations, and was also embroiled in a corruption scandal which saw him flip-flopping on the stand and accused of lying by Federal prosecutors - details none of the enquiries into Todashev's death had disclosed.

Elena says she won't stop fighting against the injustice she feels her family has suffered "for as long as she lives".

"The FBI shot Ibragim, lied about the circumstances of death, harassed and hounded us, then made up false allegations suggesting I may be a violent criminal", said Teyer, "This is my life now - I can't rest until the people who did this are made to face the consequences of their actions".

"We led perfectly normal, quiet, law abiding lives before all this, but the FBI has ripped those lives apart. I refuse to be scared, but admittedly, when it touches your family, it's terrifying. I worry for them, not myself. Do they live in fear? Yes they do - and my fear for them is constant".

The two FBI agents referred to in this report did not respond to requests for comment.

Related posts:
Todashev: May not have provided key details on the Waltham murders after all
Tsarnaev's lawyers seek Todashev interrogation recordings
Todashev: Agent involved in shooting had a questionable history
ACLU, Todashev, and surveillance concerns
Recommend this:
Tweet
VISIT OUR MAIN ARTICLES AND FEATURED STORIES INDEX HERE
Want more? For NIPS, quick takes, and blog posts by the main contributors to this site visit here
________________________________________________
We actively encourage comments, discussion and debate on this site! Please remember to keep it relevant and be respectful at all times.
comments powered by Disqus
Powered by