Unwitting dupes and leaks: Tsarnaev's lawyers push for hearing
by B. Blake

May 30 2014
Lawyers request hearing
Attorney's for Boston Marathon bombing suspect Dzhokhar Tsarnaev have once again asked a judge to investigate suspected government leaks to the media and insensitive comments by former federal employees who worked on the case.

In response to prosecutors who attempted to trivialize the leaks, Tsarnaev's lawyers said:
“The government’s efforts to deflect accusations of leaks demonstrates its indifference to these serious threats to the defendant’s right to a fair trial and the compliance of law enforcement officials with their own regulations and obligations."
Tsarnaev's representatives are seeking a hearing to establish who is responsible for the ongoing release of non-public information and investigative materials associated with the case. They also want to put a stop to prejudicial public comments made by Law Enforcement officials, which they argue are a serious barrier to Tsarnaev's right to a fair trial.
Unwitting dupes
The government said inappropriate comments made by ex-FBI Special Agent-in-Charge Richard Deslauriers and colleague Stephanie Douglas on Nat Geo special 'Inside the Hunt for the Boston Bombers' and '60 Minutes' were not relevant, as both are now retired and considered "private citizens."

The defense then produced a June 4th, 2013 document entitled 'Notice Regarding Extrajudicial Disclosure' which prosecutors sent to investigators linked to the case. United States Attorney Carmen Ortiz had previously warned officials against leaks and making statements to the media.

The notice made clear that:
"...any investigator, law enforcement person, employee or other person who has been or is assisting, or has been or is currently associated with, the federal prosecution of the criminal case of United States v. Tsarnaev and/or related investigations is prohibited from disclosing anything about this case to the media or anyone not working on this case"
Defense lawyers then raised concerns DesLauriers, a man with several decades of experience in the FBI's counterintelligence division, may have been an "unwitting dupe" confused and manipulated by the producers and editors of the shows.

They did not address Carmen Ortiz' own participation in '60 minutes' which appeared to be in in clear contravention of her own published policy outlined above. Instead they said:
“The government simply does not care to determine whether its own policies have been violated”
﻿Boat note, TEDAC and Tamerlan Tsarnaev's gun﻿
According to prosecutors, no Grand Jury material has been leaked to the public yet after accusing the defense of "reckless speculation," they admitted uncertainty about the source of a picture published by ABC News alleged to be Tsarnaev's 'boat note confession.' Tsarnaev's attorneys replied:
"Whether or not the material leaked to the press was grand jury material, discovery, or investigative material, it should not have been released to the public"
They went on to add that defense counsel had no way of knowing who had access to the picture, or who released it to the media and what steps, if any, had been taken by the government to investigate and stop such leaks.

They stated:
"The government’s apathy toward these questions demonstrates the toothlessness of the non-disclosure policy it touts and indicates a head-in-the-sand approach. That approach increases the need for the Court to determine responsibility for the release of non-public information, and to put a stop to it."
They did not directly comment on the government's prior admission the boat itself was left unattended in a 'semi public space' for days and members of the public may have had access to it.
Prosecutors readily admitted a leaked TEDAC report was made available to "hundreds of Law Enforcement and intelligence agencies," any one of which could have been responsible for the original leak.

Again the defense suggested that the government's indifference on this matter meant they simply didn't care if a violation of policy had occurred, "in a manner that threatened Tsarnaev's right to a fair trial."

Finally, Tsarnaev's lawyers took issue with prosecutor's denials leaks of investigative materials in the case had continued unabated. They referenced a May 13, 2014 LA Times report which broke the news investigators had traced a gun allegedly used by Tamerlan Tsarnaev in the Watertown shootout and death of Sean Collier to a drug gang in Maine.

The government had not even acknowledged the LA Times story which cited its sources as "records obtained by the Times in Washington" and "government" in its description of tracing the weapon.

Pushing for a hearing the defense said,
"The government’s apparent disinterest in stopping the ongoing leaks of investigative materials and other discovery or grand jury materials, and ensuring that the defendant receives a fair trial, requires the Court to hold a hearing and enter appropriate orders."
Reprehensible behaviour 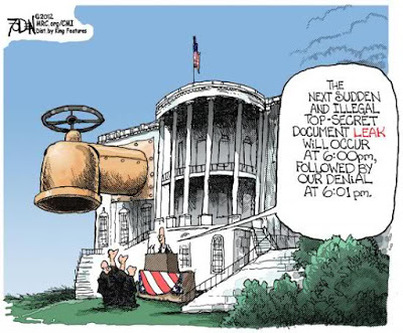 Prosecutors' blase attitude towards evidentiary leaks and refusal to acknowledge prejudicial comments made by officials is worrisome, particularly in view of the fact all associated with the case were warned in writing against such action.

Any unauthorised disclosures in a pre-trial case clearly have the ability to influence its eventual outcome. Denying leaks have occurred in the face of strong evidence or attempting to deflect responsibility for those leaks, only succeeds in eroding the public's confidence in the justice system.

Choosing to play an active role in that leaking, or participating in a public 'verbal lynching' of the defendant is far worse. It not only erodes confidence, but also makes a mockery of the Constitutional right to a fair trial.

What's the point of government issuing a notice to other areas of government, if the original government issuer then decides to ignore its own policy and break the rules whenever it chooses? Such behaviour can only indicate two things: they either endorse the leak and/or are responsible for it.

It's a potential violation of a defendant's 6th Amendment rights. In a capital case, that's reprehensible.
Related Posts:
Leaks: Weak arguments and staggering admissions
﻿Tsarnaev court docs: he said, she said﻿
State V Tsarnaev: Have the gloves come off?
The other news: Discovery issues still at the heart of the BMB case
Reporters Should Inform and Leave the Drama to Hollywood
Recommend this:
Tweet
VISIT OUR MAIN ARTICLES AND FEATURED STORIES INDEX HERE
Want more? For NIPS, quick takes, and blog posts by the main contributors to this site visit here
________________________________________________
We actively encourage comments, discussion and debate on this site! Please remember to keep it relevant and be respectful at all times.
comments powered by Disqus
Powered by