0 - 1:35 - Dispatch says they got a call from Cambridge about the carjacking, he reads off the license plate, and says the phone number of the car - the ping in the car is located at 89 Dexter. "468" is told the vehicle has guns. ******* (A) This is the carjacking, we hear on the scanner, and we then hear the SUV is moving, then we hear--"be advised, there may be guns in the vehicle."  So Cambridge tells dispatch about the guns--which must have come from "Danny"....but doesn't pass along these carjackers were the Boston Bombers who confessed to Danny "I did that, and I shot a cop"...dangerous, desperate suspects the country is searching for but fails to tell Watertown police "it's them!--be careful!"
1:35 I am right behind that vehicle right now--want me to stop it?
1:37 turning left on Laurel
1:43 light'em up
1:49 Shots fired - all units respond.
2:30 pinned down in front of a car on Laurel
2:41 might have been something like an M-80
2:46 they are getting back in the vehicle, back in the Mercedes.
2:51 they are moving down here, head down.....
2:59 still shooting - still shooting at us
3:12 we have them pinned down and they are throwing explosives at us
3:50 backyard...towards ah Cypress - White t shirt, White t- shirt, male party running through the backyards towards Cypress (******B This is heard on the 122 Dexter Watertown Shootout resident video as well.)
4:01 I don't know if that is a suspect or someone getting out of their house?
4:07 this way, running this way - running over toward you (inaudible)....that was the suspect, that was the suspect
4:19 (inaudible) behind the vehicle
4:28 we still have one behind the vehicle - we have two vehicles here
4:42 there are still shots being fired
4:48 there are still shots being fired, suspect running (inaudible)
4:55 shots fired suspect running towards the (inaudible) on Dexter Ave
5:02 we have one sitting down behind these two vehicles (inaudible) we have one sitting down
5:25 okay we got him, we got......okay Sarg, you have one in custody.
5:31 coming towards us, coming towards us! (******C This is heard on the 53 Laurel Street Watertown shootout resident video--found on this site.)
6:03 (inaudible) suspect took off .....and he ran over his partner, send the ambulance up here (****D this 30 second interval occurs simultaneously with events captured a couple of blocks away on the 510 Mt. Auburn Watertown shootout resident video: Show your F hands, show your hands, "you know we're not them" show your hands, show your hands, stay down, get down.--all this in a period of 17 seconds--and during this blank 30 seconds before the comment: "he ran over his partner)
6:09 ambulance on the way, ambulance on the way
6:47 We have unexpIoded ordinances all over the street. I don't know what they were throwing. We have unexploded ordinances all over the street.

(AN: all referenced "resident videos" can be found on this site under VIDEOS header.)

(ALERT:  The observers have identified 3 individuals:  White t-shirt--"that was the suspect", "suspect running...on Dexter", and "one sitting down behind the two vehicles".

Here is what appears to be yet a fourth individual identified in a Wicked Local. com article dated 4/19--see the yellow highlighted text below. This document originally contained the Watertown Police Scanner transcript, now gone. The final image is from A. Kitzenberg's set, showing what appears to be a third individual, knees bent, on the street in front of the headlights.) 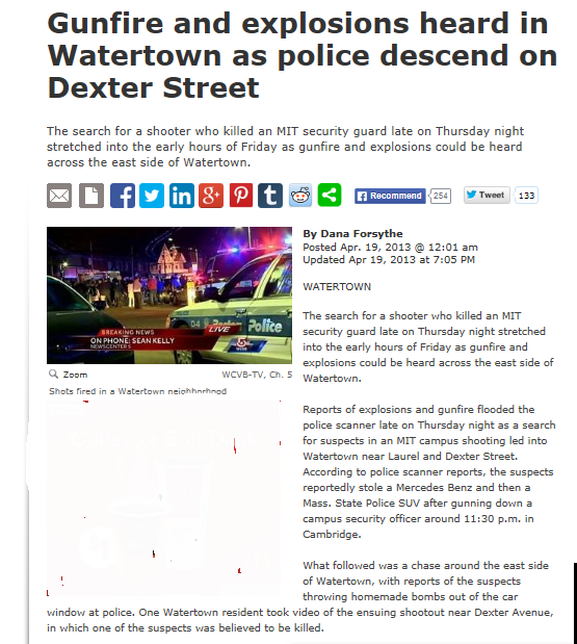 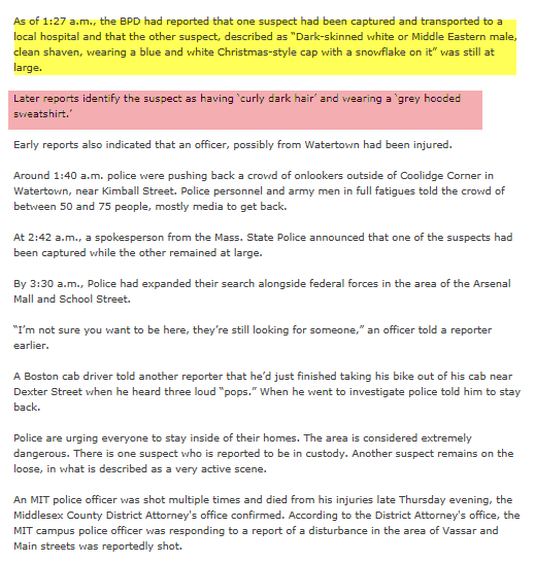 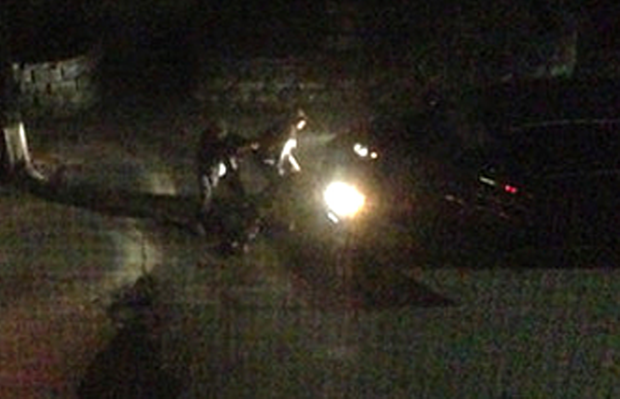