Yes, Virginia.  The Tragedy was REAL by M Baker 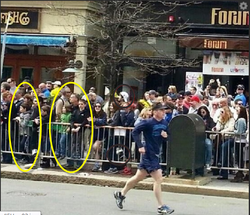 After Attorney General Eric Holder's announcement Federal prosecutors will seek the Death Penalty in U.S. v. Tsarnaev, it's easy on a site such as ours to get lost in the rhetoric, searching for loopholes and bemoaning the barbaric practice.  But there is a larger purpose here.  We are not insensitive to the tragic outcomes of Patriot's Day, April 15, 2013 in Boston.  There were three horrific deaths, a permanent loss of limbs and painful sustained injuries from which many will never fully recover.  We gnash our teeth over these senseless losses, the terror so many endured, and continue to live with, about which we can do nothing.  There is no way to alleviate the bombing victims' suffering and the nightmare of that day .

One family's journey in particular has been worse than most.  And yet, even now, they are finding a way through their sorrow and loss of their son, maiming of their young daughter, partial vision and hearing losses, and the scarring of bodies and minds.  The Richards have started the Martin W. Richard Charitable Foundation.  One of their first acts is assembling a team to run the 2014 Marathon.  The purpose of the run is to continue to build funding for the foundation they have begun.  (You can read more about their Charity here.)

Shamefully, there are both websites and individuals spreading doubts from day one about the horror this family has endured.  They would suggest the Richard family were not in front of the Forum restaurant, did not get caught up in the melee when the crowd began to push toward the railings to get onto Boylston after the first explosion, and did not experience the worst loss any parent and/or close-knit family can imagine.

The images posted here are a reminder.  A warning to those who would mislead others who seek answers, who continue to insist against all reason this was all a sham, a false-flag, a harmless drill replete with actors and no one was hurt.  The Richard family, strong, brave, and now bereft in ways none should have to face, are indeed survivors of a terrible explosion.  Their youngest son was killed that day.  They were there. We want answers for them, and for all those affected by the bombing. 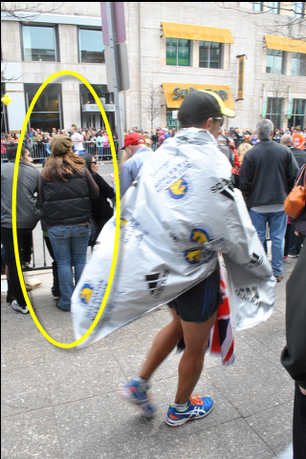 This is Mrs. Richard and son Henry in front of the Forum Restaurant at the street barricade. It is the "back" of the photo above of the family in front of the Forum restaurant. Her son Henry is squeezed in front of her, his black sweats-clad leg and tennis shoe (trainers) just to the left of her leg.
What follows is the sequence of images showing the aftermath of the explosions, photos that some have said do not exist.  But they do, and the shock, pain, and loss cannot be denied. 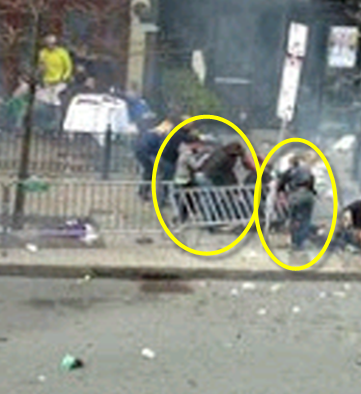 In the immediate aftermath, Mrs. Richard and her son Henry (with the distinctive white strip down the side of his black sweatpants) can be seen in front of the Forum. Mr. Richard, wearing the backpack, is pulling on the steel sidewalk barricade. 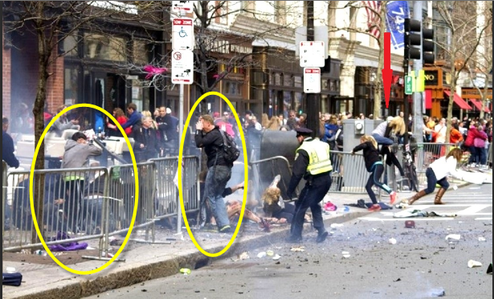 Same time frame, Mrs. Richard is now on her knees. You can see the eldest son and Mr. Richard. (This was shot prior to him moving the steel barricade.) 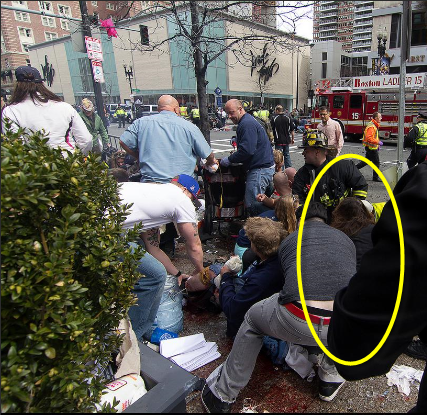 Note the location of this woman, who is Mrs. Richard. She is in the exact same spot as the above post-explosion photograph, in line with the boxed plants separating the Forum restaurant patio from Atlantic Fish patio. She has not moved. 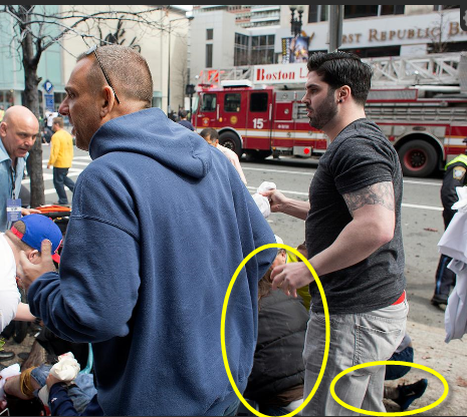 Here's the same woman. She is wearing the same black quilted vest as in the above photos. Sadly, in this image, the small, still, forlorn distinctive running shoe clad foot with the blue sole confirms who she is kneeling over. 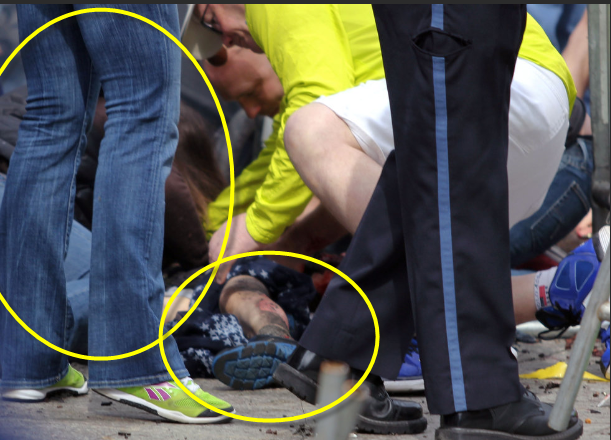 Here's the same scene, from a different angle, with the grieving Mrs. Richard on her knees, her quilted black vest clearly visible. The foot in the yellow circle requires no explanation. (and note the large blue and white tennis shoe in the right lower corner--you will see it again.) 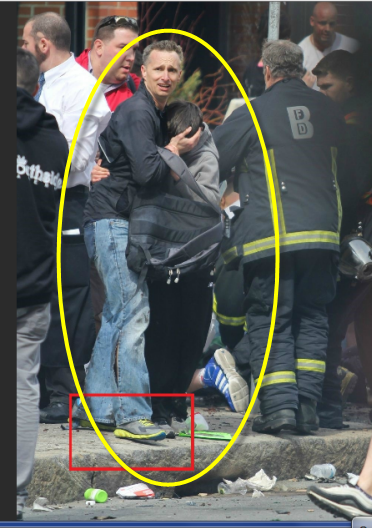 Here's another photo in this sequence. Father and son. (See that same blue and white tennis shoe caught at the bottom of the circle. It's the same race official's foot as in the image above, the same man wearing the yellow windbreaker and white shorts in previous photo.) 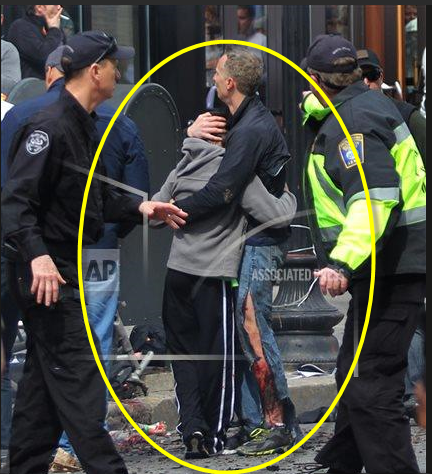 Father Richard and son to the right of the olive U.S. Postal Service drop mailbox on the Forum Restaurant sidewalk. Mr. Richard's sustained injuries are apparent. 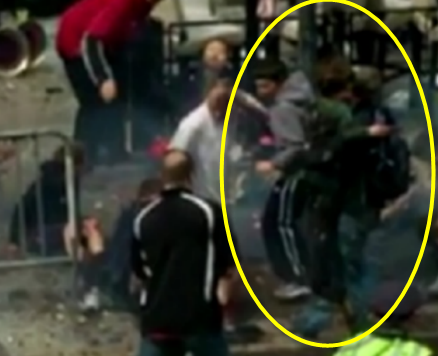 Again, in the explosion's immediate aftermath, Mr. Richard can be seen holding his injured daughter wearing the green jacket. (It is the same shade jacket she was wearing as she stood on the steel barricade.) His elder son, in the distinctive white side striped black sweats visible in the first photo in this series, is standing next to them in front of Forum Restaurant. The young Mr. A. Hern is sitting to the left of the family group in this image, wearing black sports shoes. (He is quickly taken away by rescuers. ) Note: The 11 year old Hern boy is standing with his friend 15 year old David Yepez between the two Richard family groups circled in yellow in the first photo at the beginning of this post. 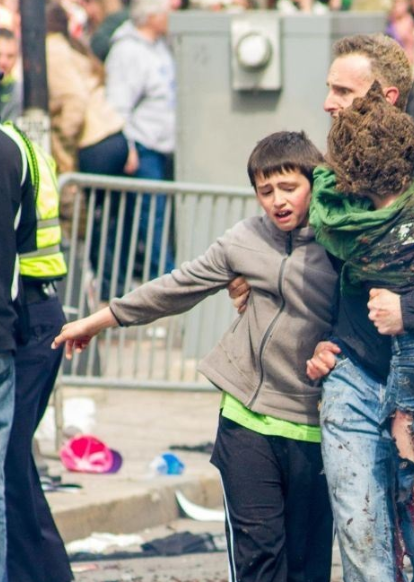 Here is the family again, the electrical transformer in front of the Starbucks next to the Forum Restaurant seen in the background.
From the Boston Globe: (12/22/2013 Bostonians of the Year 2013)

Marshall, who lives in Beverly, and his girlfriend and another couple also had been sitting at a patio table of Atlantic Fish. But he had just walked over to the sidewalk to cheer on a runner friend who would soon be approaching the finish line. When the second bomb exploded, Marshall, a former college hockey player with an athletic build, was blown back. The blast gave him a concussion and ruptured his eardrum, muffling the shrieks around him. His buddy pulled him to safety with the rest of their party on the patio, but Marshall ran back toward the injured.

He found a grief-stricken woman huddled over her young son. He removed his belt and used it to try to stanch the bleeding where the boy’s arm had been blown away. He took off his shirt and gave it to someone to use as a tourniquet on another victim. All the while he tried to comfort the mother of the boy, who turned out to be 8-year-old Martin Richard. (R.I.P.) 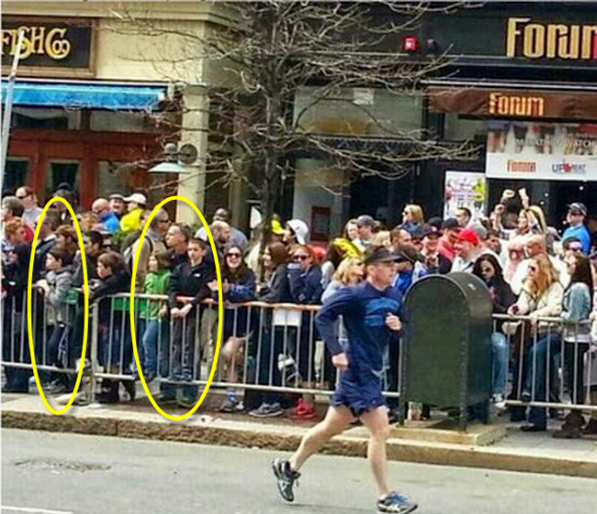 The Richard family: Mrs. Richard and son Henry. Mr. Richard, daughter Jane and son Martin.
Recommend this:
Tweet
VISIT OUR MAIN ARTICLES AND FEATURED STORIES INDEX HERE
Want more? For NIPS, quick takes, and blog posts by the main contributors to this site visit here
________________________________________________
We actively encourage comments, discussion and debate on this site! Please remember to keep it relevant and be respectful at all times.
comments powered by Disqus
Powered by