An URGENT question for authorities: Exactly when did Dzhokhar Tsarnaev deposit his bomb? by B Blake

The photo below (obtained directly from the FBI website) allegedly represents Dzhokhar A Tsarnaev outside the Forum restaurant using his cell phone 30 seconds before the first marathon explosion occurred. 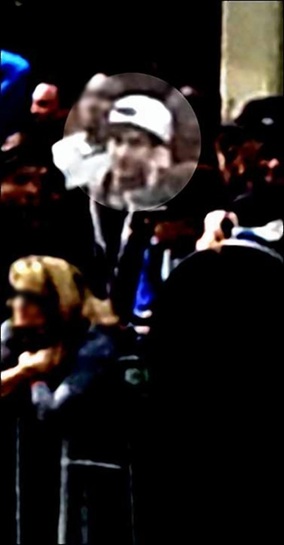 The Criminal Complaint and Indictment against Tsarnaev also alludes to this moment within the text.

The following is a verbatim statement taken from the Criminal Complaint  against Dzhokhar A Tsarnaev: p5 section 13:

At approximately 2.45pm, Bomber Two can be seen detaching himself from the crowd and walking east on Boylston street toward the marathon finishing line. He appears to have the thumb of his right hand hooked under the strap of his knapsack and a cell phone in his left hand. Approximately 15 seconds later, he can be seen stopping directly in front of the Forum Restaurant and standing near the metal barrier among numerous spectators and standing with his back to the camera, facing the runners. He then can be seen apparently slipping his knapsack onto the ground. A photograph from the opposite side of the street shows the knapsack on the ground at Bomber Two's feet...
Tsarnaev arrived on scene and deposited his knapsack on the ground before making the call, as the very next paragraph in the indictment demonstrates.

Cont...p5 section 14
...The Forum Restaurant video shows that Bomber Two remained in the same spot for approximately 4 minutes, occasionally looking at his cell phone and once appearing to take a picture with it. At some point he appears to look at his phone, which is held at approximately waist level, and may be manipulating the phone. Approximately 30 seconds before the first explosion, he lifts his phone to his ear as if he is speaking on his cell phone, and keeps it there for approximately 18 seconds. A few seconds after he finishes the call, the large crowd of people around him can be seen reacting to the first explosion. Virtually every head turns towards the east (towards the finish line) and stares in that direction in apparent bewilderment/alarm. Bomber Two, virtually alone among the individuals outside the Forum Restaurant appears calm. He glances to the east, and then calmly but rapidly begins moving towards the west, away from the direction of the finish line. He walks away without his knapsack, having left it on the ground where he had been standing.
The Criminal Complaint and Indictment against Tsarnaev makes absolutely no mention of him using his cell phone at any other point, and is also fairly specific in relation to its timings and descriptions of the circumstances that led up to Tsarnaev placing his bomb and making the call.
He placed his knapsack containing the bomb on the ground and remained beside it for four minutes. He then made an 18-second phone call, as alluded to in the  picture above. The first explosion occurred seconds after he finished the call, at which point he left the scene.

If authorities are alleging that this statement of fact relates to the picture of Tsarnaev on his cell phone above, they may have made a massive error of judgement and wholly unforgivable mistake.

The image released by authorities and obtained from the FBI website has had large areas masked out, leaving only a small portion of the photograph discernible: Dzhokhar Tsarnaev's face. Due to the high level of masking and modification it is almost impossible to see what lies beneath - if anything at all. Fortunately, the FBI also released a cropped version of the image (pictured below) to various news agencies, which although heavily degraded, modified and of low quality, actually revealed something rather surprising. 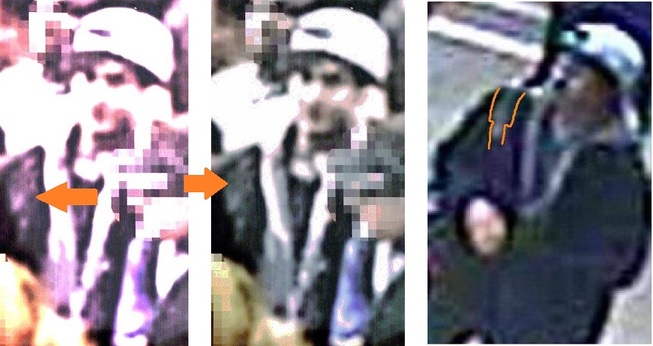 In no way confident enough to proceed with what amounted to a very primitive analysis of the photograph, we passed the image to a specialist for an alternative interpretation. A photographic forensic analysis method known as ELA was employed to reveal hidden detail that had been 'lost' in various compressions, modifications and resaves of the image. A brief description of the ELA process is as follows:

Error Level Analysis (ELA) is an algorithm that evaluates the error level potential of a JPEG image. JPEG is a lossy image format; every resave degrades the picture. The amount of degradation varies based on the number of saves. The first save loses a lot, the second save loses a little more, and by the 20th save, it is probably as low quality as it will ever get. When a picture is modified, the changed parts have a higher error level potential than the rest of the image. ELA works by saving the picture at a known quality level (like a JPEG at 95%), and then determines how much changed. Edits and splices appear as regions with more change.

Put simply, it allows the analyst to see different areas of the image that were present in previous compressions and saves that have now degraded to such an extent they are no longer fully discernible. Error level analysis allows the analyst to see the difference in quality level, as represented by light.
Was Dzhokhar Tsarnaev still in possession of his backpack when the picture was taken?

Yes, it seems he was. 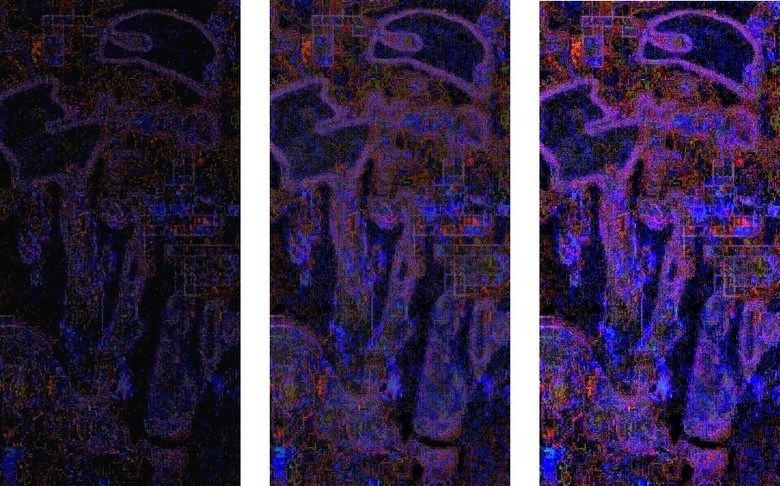 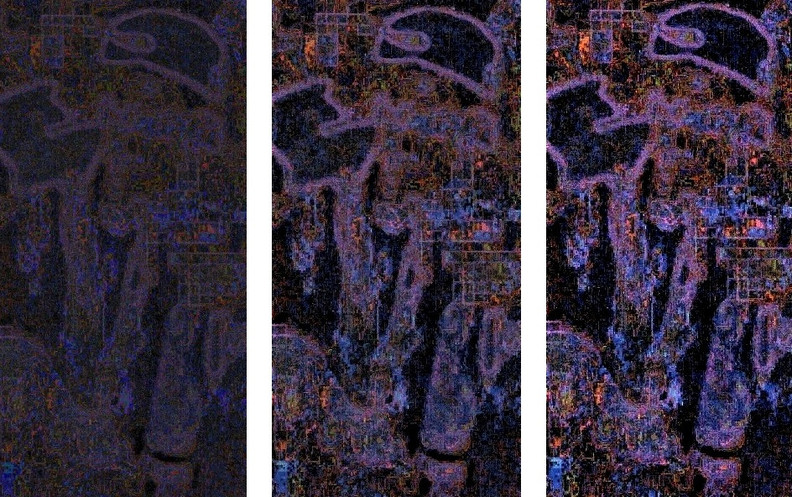 It must be stressed that ELA analysis is not a definitive tool, it merely allows the experienced analyst to interpret in a subjective manner what is there. However, even with this small caveat, it is obvious to any observer that Tsarnaev appeared to be carrying something on his right shoulder. Something that resembled a backpack. Something that resembled the exact same strap/backpack he was clearly pictured carrying in other photographs taken that day. So the question for authorities is a very simple one:
Exactly  when  did Dzhokhar Tsarnaev place his bomb?

Many have suggested that the legal process should be allowed to take its natural course whereupon questions such as these should be answered. Yet there is no guarantee crucial questions such as these will be answered, especially if the case does not proceed to trial and Tsarnaev is given the option of life imprisonment as opposed to a death sentence. Complicit in a crime or not, under such grave circumstances many would opt for the former, feeling it was just too big a risk to take.

If authorities are suggesting the photograph of Tsarnaev on the phone was taken whilst his backpack had been at his feet for four minutes, then they have a hugely significant problem to overcome : Tsarnaev still seemed to be carrying his backpack at that time. So they have either:

This is simply unacceptable, and unfortunately it is a pattern that is being repeated over and over again as far as the Boston marathon bombing investigation is concerned. This inevitably leads to another question: why? Moreover, what was the reason for such a hurried investigation that was rapidly concluded and declared by all as 'fact', when those very 'facts' are now proven to be utterly subjective and in many cases totally wrong? The standards we should strive for in questioning authorities are not those of court or justice - but those of public opinion. We should be striving to ask questions and pointing out inconsistencies and contradictions that any reasonable citizen would question had they undertaken such an investigative task themselves.The point is this: authorities used these photographs - and not any others - to persuade the public that an abhorrent criminal act was in the process of being committed. This has now led to a young man teetering on the verge of receiving the ultimate admonition - the death penalty. Yet those very same photographs contain within them many contradictions to what authorities claim they actually show. In which case, it makes no sense to simply wait for a trial that may never occur in the vain hope that some of these questions may be answered.
If they are unable to answer them now - will they ever?

The author holds a Bsc (hons) Criminal Justice and Social Policy, MA Criminal Justice, and has worked extensively within the Criminal Justice System. She now takes a keen interest in investigative journalism with particular emphasis placed on social injustice, the rule of law, and the role of the media in forming public consensus in modern society.