Human reactions to trauma are diverse, as was seen on Boylston Street in the immediate aftermath of the marathon explosions. Overall, however, these variations exist within broader groups, for example:

Of course this list is not exhaustive, but forms part of what is the norm in the immediate aftermath. And yes, some people will behave in an extraordinary manner. Much has been written about Carlos Arredondo, for example: attempts have been made to 'explain' his actions in terms of false scenarios, fake injuries, and the absence of danger. The bombs, the injuries, and the deaths were all real, and so was the courage. Mr.Arredondo and others chose to walk into scenes straight from hell to assist fellow human beings. They had no idea whether or not another bomb would explode, and they disregarded their own safety. Extraordinary ? Of course – but completely understandable in terms of motivation.

What is far more puzzling is why somebody not caught in the explosion would approach the site from a substantial distance, walk apparently unchallenged past police and security staff, go straight to the explosion scene only inches from those injured and dying, only to swiftly depart. This happened at the site of the second explosion, and was notable as a mystifying course of action. Yet there was an apparent plan: to pick up or otherwise disturb a small object underneath the mailbox. 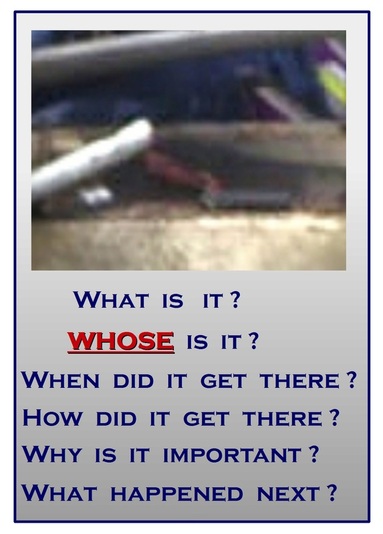 The pictures below show the location, and give an indication of the time. Near the top left-hand corner of the larger image is the small child being rescued by a police officer. This same child appears a few seconds after this image, right at the start of the Daniel Robert video. The object is present under the mailbox at this point – circled in yellow. 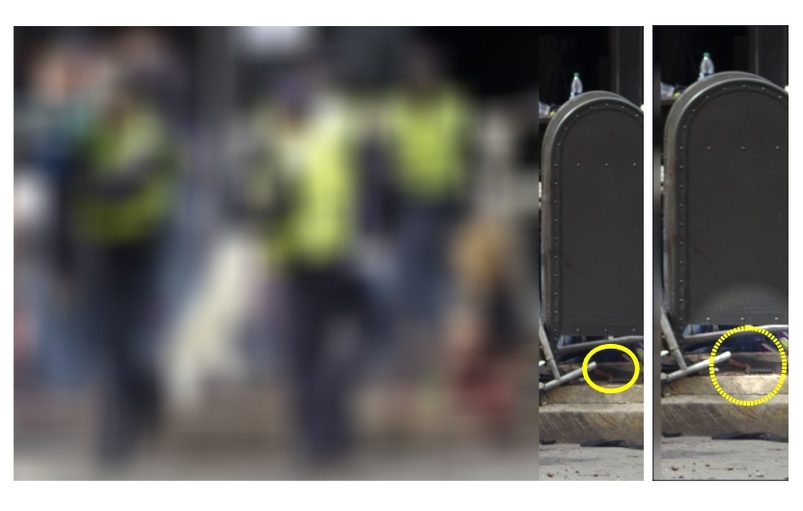 Whatever this object is, it appears to have been removed or disturbed by an individual whose identity is not clear. He does not have any other apparent purpose in being at the mailbox, and is not in uniform. He appears to have crossed Boylston Street unchallenged, and entered a site from which police and security staff were already excluding the general public. The full sequence can be seen in the Daniel Robert video at this link. http://www.youtube.com/watch?v=kJn6kz-nDhA

The yellow arrows show two objects, and the one on the right is the one which is removed. 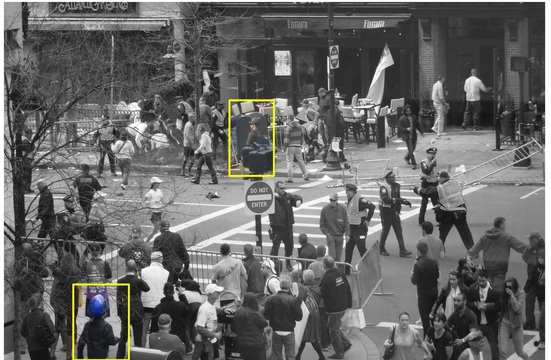 Here is a broader scene of the immediate aftermath. Note that the crowds on Boylston Street have largely dispersed, and that the police are establishing an exclusion zone. The yellow box near the centre of the image indicates the location of the mailbox. The other shows the person who subsequently entered the exclusion zone, and is seen later, apparently having some business at the mailbox.

Returning to the Daniel Robert video, we can see that the man arrives at the mailbox, stoops and reaches down, then moves on.  In the video, it can be seen that in the course of this action, the man never stops moving - it is all done in stride. 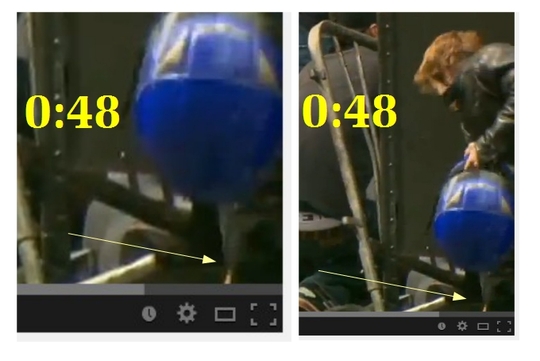 Magnifying the second image in the sequence above, the person's right hand is just visible, appearing to reach down.

Magnifying the last image in that sequence, it can be seen that the object has vanished from view, but that the other one (to the left, as we view) is still there.  The item has already vanished into Biker Boy's pocket, and he has his phone at the ready.

There is little if anything to suggest that the man with the blue motorbike helmet is the owner of the small vanished object. It appears not to have been there prior to the explosions, as far as can be ascertained. If the object did belong to him and had been lost, how did he know where to look for it ? Why was the object so important that this man walked into the immediate aftermath of a lethal explosion, with no apparent purpose other than to retrieve it ?

Getting across Boylston Street onto the scene would have been difficult – the police were already securing the area, and there was no dense crowd amongst which to vanish. This man may have had credentials authorising him to enter the exclusion zone, but for what purpose? He was apparently not relaying or receiving any urgent message, not bringing emergency medical supplies, he did not speak to anybody on the scene, nor assist in the rescue attempts.  He did not appear to be a minister of religion – whose purpose would be to give the last rites.

The sole purpose appears to be this man's business at the mailbox. If he had no credentials, why was he allowed to cross Boylston Street ? There was no problem with crowd-control at the time he first appeared, approaching from the Ring Road. If he had removed or disturbed any item under the mailbox, he may have interfered with evidence......and if so, what happened next to that evidence ?

If this man did have authority to be on the scene, why was his presence so transient, and without any apparent communication with anybody else there ? He does not appear to be following any formal procedure for the collection of evidence, yet has a purpose.

One well-known possible explanation for the marathon bombings is that a security drill was hijacked: and not necessarily by the Tsarnaev brothers. So far, there has been no admission from Law Enforcement that a drill was being conducted, but if it was, then the man with the business at the mailbox may have been acting under instructions to clean up after the drill. There is no suggestion whatsoever that he was in any way involved with or had any knowledge of the attacks. What his actions may indicate however, is evidence of a drill, with protocol adhered to despite the bombings.  At what moment was Boylston Street and its vicinity formally declared a crime scene ?

But to take similar risks to retrieve some small item from under the mailbox – what sort of madness is that ?
Recommend this:
Tweet
VISIT OUR MAIN ARTICLES AND FEATURED STORIES INDEX HERE
Want more? For NIPS, quick takes, and blog posts by the main contributors to this site visit here
________________________________________________
We actively encourage comments, discussion and debate on this site! Please remember to keep it relevant and be respectful at all times.
comments powered by Disqus
Powered by