November 11 2014
A specialist attorney appointed to assist with the prosecution of alleged Boston Marathon bomber Dzhokhar Tsarnaev faced previous allegations of serious prosecutorial misconduct, which forced a trial judge to throw out a kidnapping conviction and order the re-trial of a man convicted of murder in a Federal death penalty case. 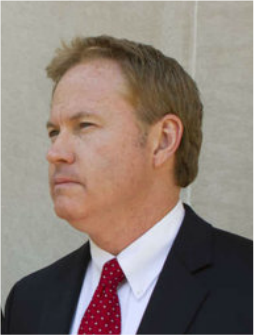 Former Assistant DA Steven D Mellin (pictured), was accused by U.S. District Judge Gerald Lee of deliberately planting evidence in order to sway a guilty verdict during the 2003 trial of Jay Lentz, a Virginia man convicted of kidnapping and killing his wife.

Lentz was sentenced to life imprisonment after the jury declined to impose the death penalty, but immediately appealed both convictions.

In 2004, jurors reported a calendar allegedly obtained from the possessions of Doris Lentz, the defendant's wife, had "mysteriously appeared" in the jury room and had been "very influential" in their deliberations.

The calendar was previously ruled inadmissible by Judge Lee.

Mellin refused to explain to the court how the evidence got inside the jury room and at one point insisted the Judge had no authority to investigate him, nor "accuse him of misconduct in the first place".

The Judge tossed aside Lentz' kidnapping conviction and declared the initial murder trial void, stating Mellin, the lead prosecutor in the case, had intentionally put the calendar in the evidence box that had gone to the jury.

"The Court concludes that Mr. Mellin's testimony indicates much more than a lack of credibility, rather it demonstrates his intent to act outside the Orders of this Court and the confines of the law. In sum, the Court finds that Mr. Mellin's actions with the calenders suggest his conduct was not a benign act or negligent error. Rather this action was reckless, and it was intentional",

Lentz faced a re-trial and was convicted for the second time in 2006.

In 2008, the Court of Appeal issued a ruling acknowledging prosecutorial misconduct played a major role in the Judge's decision to dismiss the original guilty verdicts of 2003, despite an earlier appellate court ruling that rejected the finding with respect to Mellin.

His duties include advising the Attorney General on why a defendant should be subject to Capital punishment,  acting as co-government counsel in Federal death penalty trials, and the preparation of evidence shown to a jury should the penalty phase of a Capital case be reached.

Download File
Related Posts:
Leaks: Weak arguments and staggering admissions
The other news: Discovery issues still at the heart of the BMB case
State V Tsarnaev: Have the gloves come off?
Recommend this:
Tweet
VISIT OUR MAIN ARTICLES AND FEATURED STORIES INDEX HERE
Want more? For NIPS, quick takes, and blog posts by the main contributors to this site visit here
________________________________________________
We actively encourage comments, discussion and debate on this site! Please remember to keep it relevant and be respectful at all times.
comments powered by Disqus
Powered by