January 2 2014
The trial of suspected Boston Marathon bomber Dzhokhar Tsarnaev is set to begin Monday, despite unsuccessful last-minute attempts by his defense attorney's to delay the trial and move it out of state - and despite potential jurors openly admitting to bias, some saying they'd like to see Tsarnaev "in the electric chair".

On December 31, Tsarnaev's lawyers asked the U.S. Court of Appeals First Circuit to weigh in on previously rejected Change of Venue and continuance requests, arguing that, given the nature of the April 2013 attack and the huge amount of negative pre-trial publicity the case has received, it would be impossible to seat an unbiased jury in Boston, Massachusetts.

US Federal Judge George O'Toole Jnr declined to move the trial Friday, ruling "Voir dire is sufficient...the Court has confidence that a sufficient number of qualified, impartial jurors will be identified and ultimately sworn as jurors".

The Appeals Court also rejected the bid Saturday, stating Tsarnaev's defense "had not made the extraordinary showing needed" for it to find in Tsarnaev's favour, although one Judge dissented and said the defendant's case for a Change of Venue was "strong and compelling".

But the decision is already looking shaky, as a number of prospective jurors and their family members have taken to social media - some publicly sharing their prejudice towards Tsarnaev and pre-conceived belief in his guilt. 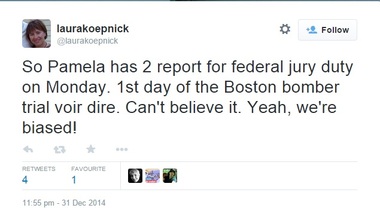 " Despite what potential jurors might claim during jury selection, any claims of impartiality and fairness would likely be overcome by the enormous prejudice surrounding the case and the public pressure to deliver a guilty verdict", said Silvergate.

Both courts also rejected a continuance, O'Toole saying a postponement would disrupt potential jurors’ schedules. "Any change in reporting dates would cause some unknown degree of disruption to those people,” said O'Toole, “A short stay could lead to a long continuance of the commencement of trial.”

But Judge Juan R Torruella, the dissenting Judge from the Appeals Court said "I strongly believe a stay should have been granted to allow a full and fair reasoned analysis of this extremely important issue that goes to the heart of our constitutional guarantees of 'an impartial jury' and due process of law".

Silvergate appeared to concur, noting disruption of 'logistics' should not be a consideration when determining a defendant's right to a fair trial, and added, that due to the enormity of the investigation and subsequent workload, "There is no way that the defense team could possibly be prepared for a January 5 trial date".

Tsarnaev, 21, has pleaded not guilty to 30 charges connected to the April 2013 Marathon explosions that killed 3 and injured more than 260.

He has been held in solitary confinement since his arrest and faces death by lethal injection if convicted.

This post was updated on 01/03/2015 to reflect The Appeals Court of The First Circuit decision.
Recommend this:
Tweet
VISIT OUR MAIN ARTICLES AND FEATURED STORIES INDEX HERE
Want more? For NIPS, quick takes, and blog posts by the main contributors to this site visit here
________________________________________________
We actively encourage comments, discussion and debate on this site! Please remember to keep it relevant and be respectful at all times.
comments powered by Disqus
Powered by