Note: This article contains PDF documents and a slide show that may not load on some phones. Switch to a computer if needed.
May 3rd 2014
In March 2014, Florida's Ninth Circuit State Attorney Jeffrey L. Ashton determined that the shooting death of Ibragim Todashev, a friend of alleged marathon bomber Tamerlan Tsarnaev, was justified by the FBI agent who shot him.

His report concluded that there was no wrongdoing in the shooting of Todashev and that 'the actions of the Special Agent of the FBI were justified in self-defense and in defense of another'.

The finding concurred with an FBI internal review of the shooting, which also supported the agent's account.
Authentic or not? 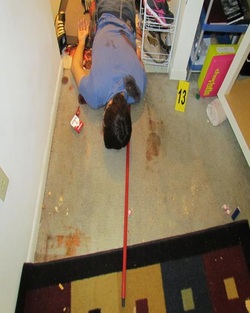 We recently published this picture purporting to be Ibragim Todashev's body, after he was shot by the Federal agent in his Florida home.

It appeared to contain a number of unexplained anomalies such as its elongation and the lack of a visible head wound etc.

We were unable to fully verify it or discover its original source, yet if genuine, it raised some valid questions about the circumstances of Todashev's death that were not addressed in official reports.

Photographs verified
The above photograph has now been authenticated along with several others that appeared in the Florida State Attorney's report, many of which appeared in redacted format.

On the left is the report we used. On the right a slideshow of the exact photographs we obtained from it, now in their uncensored form. They can be compared and are clearly all the same images.
How was it done?
The process of extracting the original photographs from the report was relatively easy. Two versions of the Florida State Attorney's report were released: an initial report that contained photographs in the above format, and after the error was noted, a second report that only contained scanned/photocopied versions of the same images.
To retrieve and download the original version of the Florida State Attorney's report visit here.

Alternatively, visit www.cryptome.org/cryptout.htm, scroll down and select the correct report for download. Note that the majority of the photographs contained within it are censored and redacted.

Next, upload the report to a PDF extraction site. The site we used was this one.

When the document has uploaded, click on 'extract images'.

All of the photographs will then appear in their original form, unredacted and available to view or download. Several names will also be present: Special Agent Aaron McFarlane (agent who shot Todashev)
Joel Gagne (officer who left the room, aka Trooper 2)
Curtis Cinelli (Trooper 1)
Questions...
The photographs raise many questions which will no doubt be discussed at length by all who share an interest in what happened to Ibragim Todashev. We have raised several issues - there are many more. By providing the above images and an explanation of how they were obtained, we hope that much needed discussion can now begin.

(To view the photographs in larger format please click here)
Related posts:
More questions surround the death of Ibragim Todashev, as possible crime scene photo is examined
ACLU, Todashev, and surveillance concerns
Suspected Terrorists or Terrorizing Suspects? The Killing of Ibragim Todashev
Who's stalling now? The BMB 'official report' circus continues
Recommend this:
Tweet
Note: Special thanks to someone who wishes to remain nameless - you know who you are.
VISIT OUR MAIN ARTICLES AND FEATURED STORIES INDEX HERE
Want more? For NIPS, quick takes, and blog posts by the main contributors to this site visit here
________________________________________________
We actively encourage comments, discussion and debate on this site! Please remember to keep it relevant and be respectful at all times.
comments powered by Disqus
Powered by