Tsarnaev attorneys push to move his trial out of Boston - again
By B. Blake

February 4, 2015
Attorneys for suspected Boston marathon bomber Dzhokhar Tsarnaev have asked a Federal appeals court to order a judge to move his trial out of Massachusetts a second time, arguing he cannot receive a fair trial in Boston. 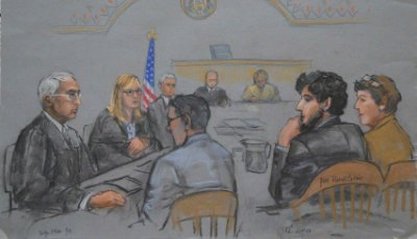 Tsarnaev's lawyers filed a heavily redacted motion Tuesday, requesting the U.S Circuit Court of Appeals force Judge George O'Toole to implement a change of venue, or stay jury selection until he reaches a decision on a pending change of venue request, filed by the defense last week.

In their new filing, Tsarnaev's lawyers reiterated their findings from a review of jury questionnaires completed by 1,373 potential jurors, which concluded that 68% already believe Tsarnaev is guilty, despite never seeing a shred of evidence in court.

They also proposed streaming the trial into a Boston courtroom to enable victims of the April 2013 attacks, who are unable to attend an out of state venue, to view the trial in real time.

Hurley added that despite a four day cancellation of jury selection due to bad weather, the court believed testimony could start by the end of next week,

But Judge O'Toole, who originally planned to question 40 candidates each day, has only questioned 114 prospective jurors over a nine day period, averaging just 11 each day.

Dzhokhar Tsarnaev, 21, has pleaded not guilty to 30 Federal charges connected to the April 2013 bombings, 17 of which carry a carry a possible death sentence.

His attorneys have filed for a change of venue three times, citing heavily prejudicial media coverage and inherent local bias. The judge rejected two previous requests and has yet to rule on the third.

Bar any decision by the U.S Circuit Court of Appeals, jury selection is expected to resume Wednesday.