Part 1:   We knew when the bomb was placed, but not what it looked like.

﻿13 000 videos, 120 000 still images – at what is probably the most-photographed crime scene in American history. The examination of video evidence was under way very swiftly, with the Forum restaurant video in the hands of law enforcement before 5pm on the day of the attack. Reviewing video evidence can be extremely tedious - most of the time, not much happens, and even a trained analyst's concentration can quickly deteriorate .

Fortunately, recent technological advances have allowed investigators to drastically reduce viewing-time without loss of information. In 2011-12, the FBI acquired such technology: Briefcam video synopsis. It can provide substantial, detailed, and relevant intelligence very quickly, allowing the operator to define search parameters, such as  'Let's see everything that happened around that tree and the mailbox, from say, 6AM.' A basic 6AM – 3PM search could take less than 15 minutes. Not bad – and probably way more time-efficient than looking at a single short snip of murky footage 'hundreds and hundreds of times.' A quick demonstration video (a 'must-see') can be found here.

Although the FBI has not commented as to whether or not BriefCam was deployed in the BMB investigation, that it would not be is difficult to imagine. With so much material to review, and such urgency, there would be every reason to use it.

Amit Gavish (G.M. Briefcam in the Americas) is well-placed to give an opinion on security and surveillance: his credentials can be viewed here and here. Asked to comment for securitysystemsnews.com shortly after the marathon bombings, Gavish stressed the importance of examining footage from well before the incident.

Of the (publicly-mentioned) footage from Monday, he said that it  is likely “crowded to the point where you can’t see who put the device at the scene, and you have to go back a few days prior and see who was there … who looked suspicious, who was just walking by or loitering.”'  Whether or not Gavish is correct about Boston specifically, he is correct in principle. Nothing here happened in a vacuum. With investigators starting from scratch, the importance of gathering as full an intelligence picture as possible, as soon as possible, requires no explanation.

Richard DesLauriers knows this. Even before taking command in Boston in 2010, his reputation was formidable. Yet in TV 'anniversary specials' he recasts the early stages of the investigation in a way that makes the FBI look inept. But the records from the time of the bombings show important differences from his more recent accounts.

From the press conference of Tuesday April 16th, 2013:

In addition, this morning, it was determined that both of the explosives were placed in a dark-colored nylon bag or backpack. The bag would have been heavy because of the components believed to be in it.

And we are asking the public remain alert and to alert us to the following activity....

Someone who appeared to be carrying an unusually heavy, dark-colored bag yesterday around the time of the blasts and in the vicinity of the blasts. '

One thing at least, was clear: that the bombs had been concealed and transported in black bags. There is independent evidence to support this: The shredded remains of a black bag were seen on the street with the remains of batteries and wires – apparently propelled from the 2nd blast site. A victim from the 1st site (Michelle Mahoney) described discovering strands of black nylon in her hair, which were reportedly taken for forensic examination. ﻿

At this stage, the investigation still made sense. Although it was not yet possible to say exactly when the bombs had been placed, DesLauriers's appeal to the public was based on what little was known. His original appeal was that the public alert the FBI to anyone who 'appeared to be carrying an unusually heavy, dark-colored bag yesterday around the time of the blasts and in the vicinity of the blasts. '. But on the National Geographic programme, DesLauriers recasts this, concentrating on as small a picture as possible, and the black bags were now absent .

At face value, and perhaps from a first-time perspective, all this looks reasonable. Indeed it is, but these statements – made as a private citizen in 2014 – are misleading, as they are inaccurate and imprecise claims about events over which he presided in 2013 in a professional capacity. An example of how this is misleading is shown below. These are not quotations, but the essence of two quite different logics which emerge when the statements are analysed and compared.

A closer look, (1):
No.  Not 'something that could have contained an explosive device', but ﻿'an unusually heavy. dark-colored bag'.﻿_
﻿This is 'Mr.Meticulous' speaking – the master of the carefully-worded press conference, whose original appeal to the public was much more precise, and was based upon publicly-known fact. To accurately recount what he said at the time, DesLauriers needed only to have reviewed the record of his own words at the press conference - the 2014 TV shows purported to be documentaries, after all.  It almost looks like the use of the words 'black bags' was meticulously avoided in this particular section, yet elsewhere in those documentaries, it was presented as fact that Dzohkhar Tsarnaev's backpack was black - though no evidence was presented.  It looks like every mention of the black bags has been thought through, likewise for the omissions - meticulously so.

Yet, the black bags made it all the way to the Indictment.﻿

The indictment:
﻿"The IEDs that exploded at the marathon......were concealed inside black backpacks.' ﻿   (p3, para.7)
﻿'DZHOKHAR A. TSARNAEV walked to the front of the Forum restaurant ... where he placed a backpack concealing an IED constructed from a pressure-cooker...' ﻿ (p8, para.24, indictment)

These two allegations necessarily imply a third: that Dzhokhar Tsarnaev carried a black backpack on Boylston Street that day. Yet as far as we have seen, this is not true. He is seen entering Boylston Street with a pale silver-grey backpack, which is lightweight, sags open, is carried on one shoulder, and is none too well secured. It is entirely the wrong colour, shape, size and weight.

If Tsarnaev did place a large, heavy black backpack, he had to have collected it somewhere between the Whiskeys Steakhouse and the Forum restaurant, and somebody else had to hand it over or mind it until he arrived. If that is what happened, that is the end of the 'Lone Wolf' narrative. If not, then according to what is alleged, Tsarnaev is not guilty. Similarly for Tamerlan: as his backpack (as seen on the Whiskeys footage) was also the wrong shape, size, and weight for a 6L pressure-cooker bomb, then he too had to have collected the bomb-bag on Boylston Street. If he didn't, he is not guilty. With the number of surveillance, traffic, private, and LE cameras on Boylston Street that day, there is every possibility that the collection of the bomb bags would have been seen.......if that's what happened.﻿

Yet not only is there (to date) no footage of the Tsarnaevs carrying the 'right' bags, but there certainly is footage showing them with the wrong bags. It seems that this difficulty has been 'overcome' via the magic of television.﻿On a (2014) pre-recorded interview, DesLauriers (again speaking as a private citizen, but on the programme because he was the lead investigator at the time) assures us that Dzhokhar Tsarnaev's backpack was black. What he claims to have observed in a professional capacity is contrasted with what he actually observed. 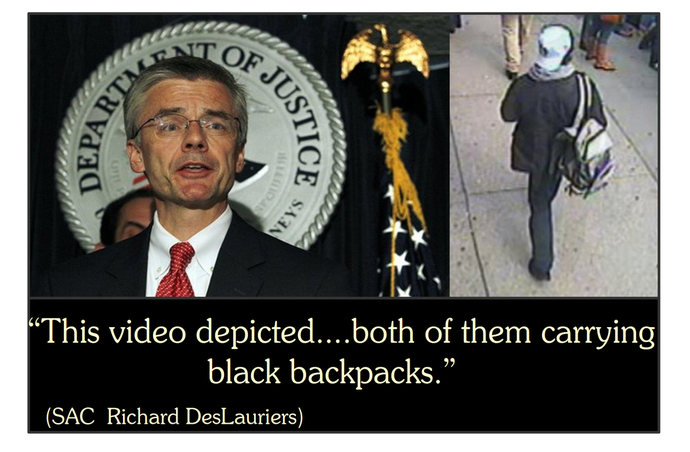 This amounts to a  suggestion that in 2013, the FBI did not have the slightest idea what the bomb bags looked like. From the available evidence, and the FBI's own statements the very day after the attack, this is not true.  This recasting of  2013 is further insidious, as it effectively excludes all individuals and all times other than those to which DesLauriers directs our attention. DesLauriers's claim here, is that when the FBI reviewed the video back in April 2013, they were able to identify the moment that the bomb-bag was placed, without knowing what it looked like.  So how exactly would they have recognized it ?   Let's not forget that this was from a senior FBI veteran of some 20 years in counter-intelligence - though in 2014 on the interview, speaking as a private citizen.)

There is a scenario where this does makes sense: if we define the 'when', we can define the 'who'....and the 2014 'when' was defined as the time that Dzhokhar Tsarnaev was at the Forum.....it defines the 'who'........but there's nothing specific about the 'what'.

But this is not what was claimed in April 2013, and the FBI did know the 'what', and in the indictment, are sticking with it.  Transfixed on 'a particular moment in time' - ineptitude ? misdirection ? 'Eureka' ?